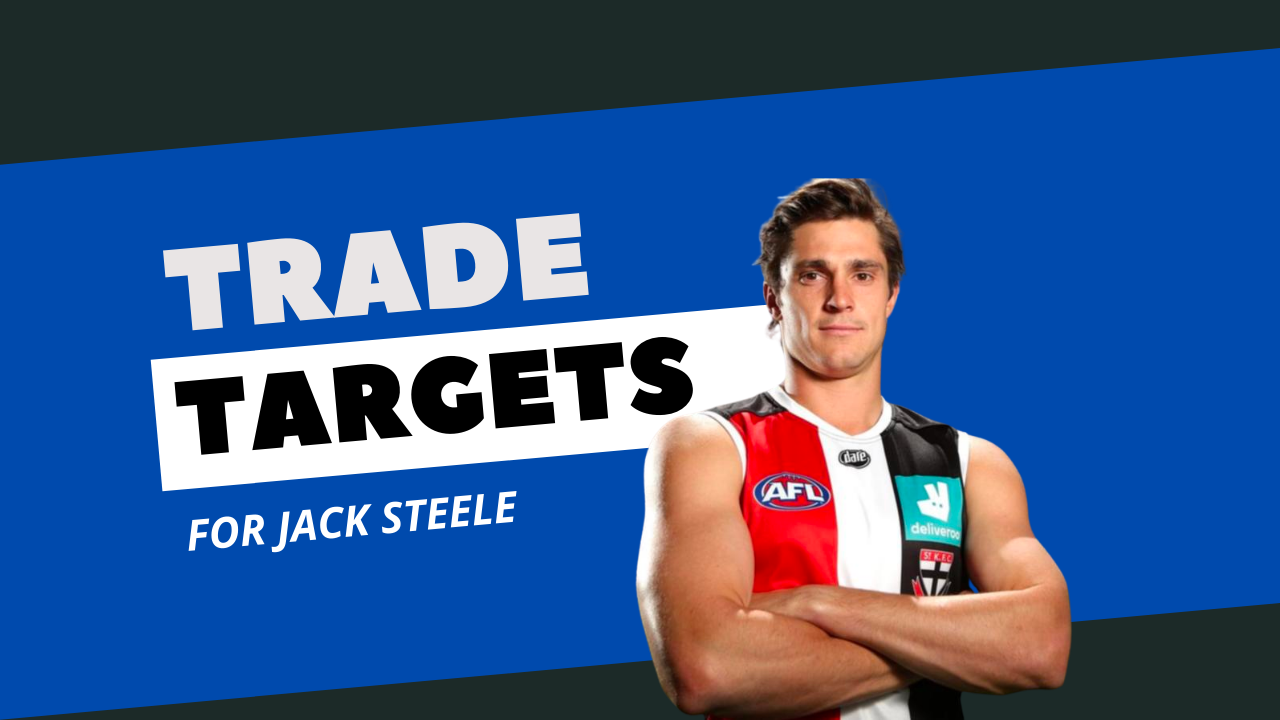 On Sunday afternoon, the St Kilda Football club confirmed the fears of fantasy owners. Jack Steele will undergo shoulder surgery and be out for an extended time. So, unfortunately, he’s a must trade. Here are some of the best trade targets, according to MJ.

Injuries are never great to cop. However, they do create an opportunity. And for the 28% of AFLFantasy, 35% DreamTeam and 31% of SuperCoach sides, he now becomes a gateway to get almost any player in the game you wish. Before we look at some of the options, there is one big ‘cavitate’ for you. Check your bye structure. The positive of this injury is it can be the avenue to restructure your side. St Kilda will miss the round 12 bye, and as I look at some of the top-rated teams, they are overloaded with premiums in this round. If they aren’t careful, they could undo all their good work with a poor structure. This injury might be your ticket to restructure.

Speaking of the byes, even though Jack’s on the R12 bye, I wouldn’t want to be trading into other premiums on the same bye. Given that whoever you pick from these teams will miss a guaranteed one of the next three games, I’d rather target these premiums as post-bye upgrades.

This will be the line I suspect most owners will be targeting as a trade. Jack Steele was in your side as a ‘perma-captain’, someone you could place the VC/C most weeks regardless of the matchup. Thankfully across the formats, we’ve got multiple good replacement options. All of Touk Miller, Andrew Brayshaw, Jack Macrae, Lachie Neale, Clayton Oliver and Callum Mills has been super dependable over recent weeks. All look destined to be among the upper echelon of midfielders this season, and all deserve consideration in your team regardless of the formats you play. If you can’t split those names, then the tiebreakers are bye rounds structure, immediate fixture and lastly, price tag.

Bailey Smith‘s fantasy breakout has been firmly established, and he’d still be a viable target. The Bulldog running machine is probably more suited to AFLFantasy than SuperCoach. In AF, he hasn’t scored below 92 all year and has scored seven tons. Rory Laird must seriously be considered if low ownership and high output are desired. Over the last month, he’s averaged 118 in AFLFantasy and 126 in SuperCoach.

All of Patrick Cripps, Sam Walsh, Zac Merrett, Darcy Parish, Josh Kelly and Ollie Wines should normally be in the conversation for replacements. Still, with all missing, in round 12 on the bye, I couldn’t advocate for trading into a player who will miss one game in the next three weeks.

I don’t mind Marcus Bontempelli as an option. But with the round 12 DPP additions not far off, I’d rather wait to see if he’s getting MID/FWD status before fully committing to him. I think he’ll get it. Some might be keen on Ben Keays, but I like cheaper options than him too much if not surpass his scoring output.

One of those ‘cheaper’ options is Christian Petracca; he shouldn’t be ignored here. He’s coming off the back of a 130+ score across the formats and has shown over the past three seasons he’s capable of matching it with any midfield premium in the game. He does present some financial value and does have a match against the Kangaroos this week.

If you don’t own Max Gawn, this might be your last obvious chance to get him before the byes. Max is clear and supreme, the #1 ruckmen in 2022 and the longer you go without him, the further back you’ll find yourself from the leaders. A fortnight ago, non-owners had the chance to get him in for Brodie Grundy. You’ve now got the opportunity to rectify it, don’t make the same mistake again!

Josh Dunkley is the clear topline forward now, but with new DPP’s to hit the game in a fortnight, we could see some serious reshaping of the best forwards. Both Bailey Smith and Marcus Bontempelli are genuine candidates to get forward status. I’m leaning toward both probable gains. At the same time, Max Gawn is genuinely close to consideration too. I mention these names here because I cannot advocate for trading into a forward premium via Steele, given the highly variable uncertainty in this position.

Sam Docherty, Jayden Short, Jack Crisp, Jack Sinclair, Bailey Dale, Jordan Dawson and James Sicily are all top ten total points defenders. As good as they’ve been for owners, I’m not sure many teams are targetting for defender premiums. Given the lack of defensive cows to start the season, many ran deeper with premiums in the starting squad in this line. However, if you need one, any of the above names have proven to be good buys.