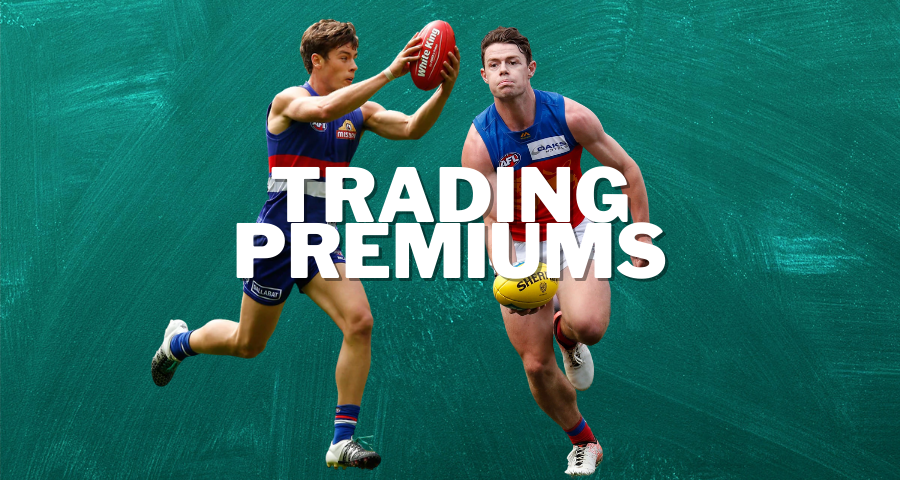 It’s the trade current owners are dreading to make. But due to a shoulder injury suffered on the weekend and subsequent decision to get surgery has meant one thing. It’s for us to trade out Josh Dunkley in all salary cap versions of Fantasy Footy. On top of this, Lachie Neale will require surgery on his ankle and will almost miss multiple months of footy. He too is a must trade out player. But who should we be looking at as trade targets?

It’s not a pretty sight, beyond Josh Dunkley there isn’t many forwards banging the door down across the formats, but with that said we still do have some options. Firstly, the enigma that is Jack Ziebell. It’s a role with scoring ceiling that nobody saw coming, as a result he is someone that we need to at least consider.

A combination of North’s defensive general Luke McDonald suffering a long term injury and the footy living inside their defensive 50 means their skipper is seeing plenty of footy is his new role. For as long as he has this role he’s going to show a high scoring ceiling and be someone to consider. However, the bigger question is, can you pay for him at peak price? Personally, I’m not convinced.

Based on Steele Sidebottom’s 130 in AFLFantasy/DreamTeam & 119 in SuperCoach last weekend, he’s a prime option for coaches to consider. The Pies play Gold Coast, North Melbourne and a slowing Sydney over the next 3 weeks. You might be thinking to yourself, sure he’s had one good score, but can you bring him in after that? Simply, yes! He doesn’t just have one good score. He has a decade of good scores, as we spoke about in the preseason. It’s not a flashy pick, but it’s as safe as a premium forward as we can get in 2021.

The injury for Lachie Neale is far from ideal for the Lions, but it probably does mean it forces their skipper Dayne Zorko back into an exclusive midfield role. With three scores over 108 in AFLFantasy/DreamTeam, the lowest score of 71 and an average of 99 in these formats, his current season is back up his reliable history.

In SuperCoach, he has 4 tons between 101-115 and is averaging 94. If you do target him as the option, keep in mind that in round 9, he’ll reacquaint himself with Touk Miller in another famous battle. He’s often come off worse for wares from a fantasy perspective in those clashes.

Other across the formats I like are Shai Bolton, Toby Greene and Rowan Marshall. All have the combination of scoring legacy and current form to match. While maybe not a coaches first choice, they are viable options in a line that has arguably the least variety of selections.

In AFLFantasy, you have many options to consider that neither DreamTeam nor SuperCoach players have due to the round 6 DPP additions. In no particular order, any of Nat Fyfe, Josh Kelly and Lachie Hunter are genuine options.

Just 2 weeks ago, the greatest headache for most coaches was the absence of R2 selection Matt Flynn. While he had a dominant first term against the Dogs, he had no impact on the contest after half time. So it wouldn’t surprise me to see Shane Mumford return.

The injuries to Neale and Dunkley provide Flynn R2 truthers with the chance to move on their R3 up to one of Reilly O’Brien, Max Gawn or Brodie Grundy. Even without an R/F at R3, you can still make that move, even if it is a trade pairing that creates a structural shuffle. For example, a downgrade of Dunkley/Neale to a Jy Farrar while upgrading Lloyd Meek to the other premium ruck target you desire is an easy way to restructure your team.

With the Giants playing on Saturday at 2:10pmEST, coaches will know before the round starts whether he’s named or not. Regardless, if it’s not this week, then next week, you need to have a plan to avoid another impending donut.

You can throw a dozen different names into the mix for this line. But across the formats, any of Clayton Oliver, Jack Macrae, Jack Steele, Sam Walsh or Zach Merrett has been consistently dominant premiums. You can’t go wrong with any of these topline picks. And in most weeks, they are genuine VC/C options across the formats.

Other legit top candidates are Adam Treloar, Christian Petracca, Tom Mitchell, Mitch Duncan, Marcus Bontempelli, or you could go left field in Jarryd Lyons or even Cam Guthrie. They’ve all got a great history of scoring now over several years.

If low ownership is the prime objective, then you’ve got a few to gamble on. Touk Miller and Darcy Parish are thriving without some of their bigger name teammates out through injury. The suitcase Hugh McCluggage and Jaeger O’Meara have also been on fire lately, and while they might not have the frequency of ceiling that others do, they are highly unique and scoring well.

Every team is unique in their make up, even moreso now with these popular premiums out injured. Before we look at the defensive targets to look for, I want to remind you about 3 players you might want to save room for.

Firstly, Jordan Ridley. Barring any complications, he’ll return this week from a concussion. After delivering coaches, an injury impacted 31 in SuperCoach and 15 in AFLFantasy/DreamTeam; he’s got some price drops incoming. Depending on the format you play, he’s set to drop between $50,000-$100,000. At that price point, given his scoring pre concussion, he’s gonna be a perfect buy low option.

The second is Caleb Daniel. In that past few seasons, he’s proven to be a 90+ averaging defender across the formats. By this time next week, he’ll be under $400,000 in SuperCoach, under $500,000 in DreamTeam and almost $550,000 in AFLFantasy. That’s a bargain given his previous years and pore suspension scoring.

My only hesitation in advocating for him is the improvement of Bailey Dale. His past four weeks have been excellent, and he’s certainty gaining his fair share of the Bulldogs defensive ball. The ‘helmut’ will still be good. But he might have his ceiling dinted slightly.

Lastly, it’s the forgotten star of the backline Lachie Whitfield. According to the club’s website, he’s likely to play VFL this week before returning to the AFL the following week. If he can get back to full fitness, he’s certainly someone every coach would ideally want in their completed side. So maybe you can save a space for him as an upgrade after the Giants round 12 bye.

If, after those names, you’re still in the market for a premium defender, we have plenty of options. Callum Mills is the leading points scorer across all game formats and has low ownership compared to the other top tier options. His teammate Jake Lloyd isn’t having as big a year as previous, but he’s still right in the mix for being the top defender by seasons end.

Rory Laird and Sam Docherty are probably next in a line across all formats, with the latter starting to really get going in the last few rounds. I also like Tom Stewart and his reliable scoring range, even if he does lack some of the ceiling of others on this list.

Other options to consider are Jack Bowes, Dan Houston, Christian Salem and Jack Crisp. The return of Bachar Houli has slowed the scoring of Jayden Short for the past few weeks. If I were an owner, I wouldn’t panic trade him. But unless Houli gets a long term injury, I wouldn’t be looking at him too seriously now.

In SuperCoach, Daniel Rich is ranked 5th for all defenders and should be some to have on the watchlist at the very least.