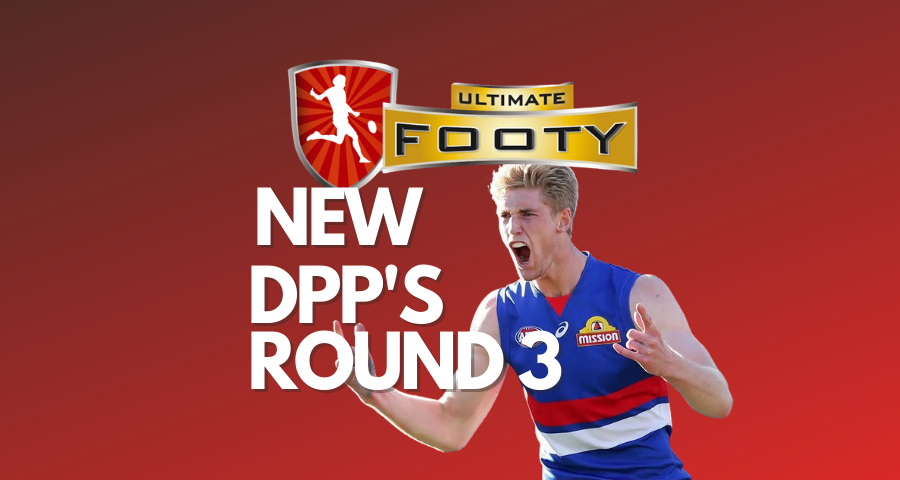 Nick Hind has gone from occasional AFL player at St Kilda to a permanent fixture of the Essendon backline. His run and carry have seen many supporters not notice the gap left by Adam Saad. He’s currently averaging 93, and now as a back, is ranked just outside the top 10. Owners now can play him up forward or down back depending on the unique needs of their squad.

Three weeks of scores in this ’60s for Sean Lemmens see him be at the very least ‘ a consistent performer’. Before any of these DPP’s were added into the system, we’ve got over 75 backs currently averaging more than Lemmens. But in the forward line, it’s 72.

Given the new names added, he drops back to about the 80th best back. So if you were picking him anywhere, which 7% of leagues have, it’s as a forward that he’s got the likely more scoring relevance. This is a polite way to say only consider if your desperate and the league your playing in a super deep in terms of players required.

No surprises here, with Jarman Impey gaining back status. The hawks love his speed and ball use out of defensive 50. His teammates look to get the ball in his hands and every available opportunity. Depending on your overall squad’s health and balance, he’s now able to be played as either a forward or back on the field comfortably.

Currently averaging 52, he’s found himself at home as part of a new look Bomber backline alongside Nick Hind. But he shouldn’t be someone you’re considering, given his top score of the season is 60. You should be able to find a back or forward capable of scoring a 70 most weeks as a ‘plug and play’ option of the waiver wire most weeks.

Another DPP that’s been mooted since the preseason began. Geelong has spoken about and now used Tom Atkins as a defender. The club loves his pressure acts and the defensive efforts on the game. If the Cats can get their possession game going, he should be in a 70’s averaging BACK/FWD, which would be more than handy for his owner as a bench option if nothing else.

The run and carry defender is well and truly enjoying a scoring renaissance with how the AFL is being played. After attempting to reinvent him as a small forward over the past few seasons, Melbourne has deployed Jayden Hunt back into his preferred defensive role.

Sometimes you need to look a little deeper into the numbers rather than just a players ‘average.’ Jayden had a stinky round one score of 38. As a result, his average of 70 doesn’t look hugely appealing. But in the past 2 weeks, he scored 80 & 93. Currently, he’s been picked up in 42% of leagues and is probably worth a little bench stash if you can grab him. Another score of 80+ next week, and he’ll be on everyone’s radar by then.

The Roos captain has been revitalised as a scorer and will provide his owner flexibility to play him at whatever end of the ground they need. Maybe it’s to do with the fact that he’s placed where the ball seems to be permanently living.

The only flag I have is the club flagging Luke McDonald’s return as early as round four. What impact he has on Ziebell’s scoring ceiling is yet to be seen. But those who drafted him with an average draft position of 122 will be stoked with his return thus far. Is he a sell-high candidate? Or will this scoring trend continue.

FINALLY! The Swans have unleashed Callum Mills into the midfield and it comes as no surprise that he’s more consistently delivering strong scoring. Over the first three rounds he’s delivered a 121, 85 & 111 to average 105.

The addition of this new status outside of the squad flexibility will only benefit coaches who have a relatively strong backline and have struggled either with injuries or poor drafting choices in the midfield. In that case, if their bench back is scoring better than an on-field centre, they can easily improve their scoring potential by playing Mills as a centre. Beyond that scenario, it’s just some nice versatility to add to your squad.

Should this role hold for the season, keeper league owners will need to prepare for life without Mills in their backline next year.

The Tigers MID/FWD split of Kane Lambert has continued for yet another season. Like many players that gain ‘centre’ status, it’s the least beneficial in boosting your on field scoring. He’s way more valuable as a forward to owners than a centre. That said, it’s a nice bit for squad versatility for his owner.

The Saints picked up Shaun as a key position insurance policy. And boy, have they needed it of late with Rowan Marshall and Paddy Ryder being unavailable for the season so far. Mckernan has been thrown into a heavy ruck role over the first few games. However, with Marshall getting through his VFL hitout last weekend and Ryder back from personal leave, his likelihood of more games isn’t looking great.

All that said, he’s average 40 and shouldn’t be someone you consider regardless of the returning Saints talls.

The long term injury to Sam Draper forced the Bombers into a restructure. That’s meant two metre Peter has gone from a ‘relief ruck’ role into the leader of the pack. A score last week of 76 against the Saints was solid but far from spectacular given he was up against an equally inexperienced Saints ruck structure. Games against Sydney, Brisbane, Collingwood and Carlton over the next four aren’t going to be much easier.

The addition of RUCK status should mean you only place him in that line if you find yourself suffering an injury or a late out. He’s not someone you’d feel comfortable with on the field in reality as either a forward or ruck. It’s just squad versatility and flexibility this move.

I feel like every year, I write about Cale Hooker gaining a status. Either where he’s listed as a BACK and gaining FORWARD or vice versa. This year, Cale adds FWD eligibility, given his Bombers have used him as their #1 tall forward target. Depending on the scoring categories you have turned on for your league, you’ll have either zero or minimal amount of in rest in Hooker’s scoring. He’s currently owned in 21% of leagues, and I doubt that percentage will jump much after this DPP addition.

The Hawks have transitioned ‘Kosi’ from a key defensive role into a full forward. But with an average of 43, he shouldn’t be someone you should be considering. Hard Pass.

Stefan Martin’s addition has allowed Tim to become the ‘second ruck’ option for the Bulldogs. As a result, he’s playing predominantly full forward and creating a marking target for the doggies. Normally a ruck adding forward status is only a ‘squad versatility’ move. But if the owner has another viable ruck option in their squad, English is scoring well enough (avg 78) to be a rosterable forward on the ground.

At the start of the season, Errol Gulden gaining forward status might not have created much excitement. However, with scores of 108, 93 & 98 he’s every chance to become his teams F1. Only Taylor Walker, Josh Dunkley, Jack Ziebell, Dayne Zorko and Chad Wingard have a higher average than him.

If previously you’d been too worried to place him on the field as a centre, worry no more. Any risk of a ‘down’ score is now greatly minimised in this new eligible line. His additional DPP is easily the biggest potential scoring impact; given coaches have relatively thin scoring options in this line. With an ADP of 297, he’s already a leading contender for being one of the biggest draft day steals of the year.