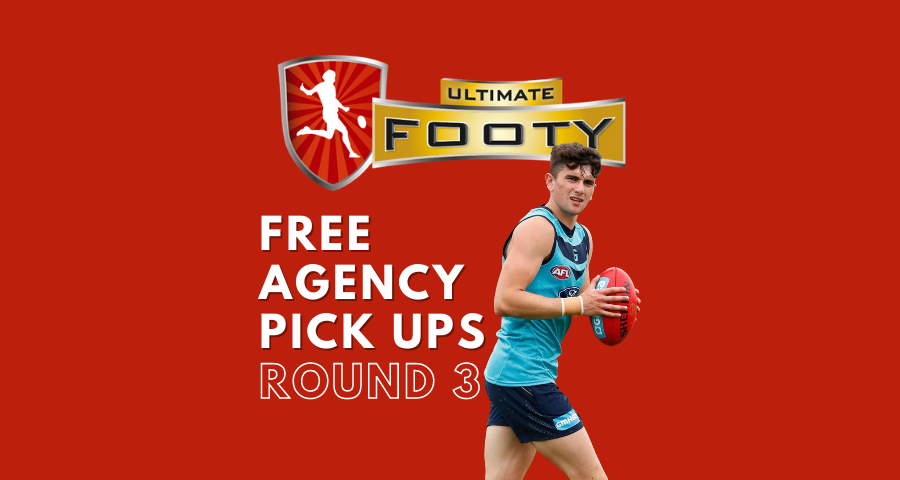 Still nothing of interest in the ruck line and slim pickings in the midfield but plenty of options elsewhere including a defender turned midfielder at Geelong who is an early nominee for tagger of the year!

The speedy Irishman has been a solid defender for the Cats for the last few years without ever really showing much in the way of fantasy scoring. In fact, before this season he had only ever collected 20 touches or more in a game twice. But in round 2, Chris Scott tasked him with tagging the reigning Brownlow medallist, Lachie Neale and he did a stellar job.

This week, he tagged another Brownlow medallist in Tom Mitchell and again won the battle clearly, recording a career high 26 touches and 8 tackles whilst attending more centre bounces than any other player on the ground with 20 out of 23. He is averaging 91.5 in this new role and is likely to gain DPP status as he has now attended 86% of centre bounces in rounds 2 and 3 after attending zero in round 1.

Nelson has been around for a while now and has slowly increased his fantasy average and flirted with UF relevancy, but this year looks to have solidified his spot in the back 6 at the Eagles. He scored a nice 91 in the AAMI Series clash against Fremantle and on the weekend just gone, joined in the kick-mark feast against Port Adelaide.

He took 10 marks on the way to 25 touches (21 kicks!) and his first fantasy ton, not including the adjusted 115 in round 18 last year. West Coast like the ball in his hands as he has taken the 2nd most kick-ins this year behind Hurn, playing on 100% of the time.

The Swans first pick from the 2016 draft has been building steadily for the last few years learning from the likes of Parker and Kennedy and alongside a host of young Sydney stars, is now getting ample midfield opportunities. Still playing predominantly as a transitional half forward/winger, the exciting Florent has now attended 30% of centre bounces this season.

He had a career high 29 touches and a nice fantasy ton on the weekend against the reigning premiers and is only going to get better from here.

There wasn’t a heap to choose from in the midfield this week so this one is a bit of a hit and hope but Seedsman is quietly putting together a decent season on the wing for the Crows averaging 6 marks a game. The veteran has never really reached his fantasy potential due to injuries and form issues across his career, but he is exciting to watch in full flight and would sit comfortably as your last midfielder.

Nothing to see here again, try again next week!

Now in his 6th season, this son of a gun is starting to look a more commanding figure, not unlike his old man. He looked excellent in the AAMI Series match against the Saints scoring 90 thanks to 3 goals and 4 tackles and looked to be backing it up in round 1 against the Tigers sitting on 40 before injury ended his night just before half time.

Thankfully he only missed the one game and returned on the weekend with an equal career high 18 touches, scoring 78 and contributing strongly to Carlton’s first win of the season.

Crisis creates opportunity as they say and with injuries to young gun Draper and veteran Phillips, the Bombers’ ruck stocks were in crisis last week, leading to an opportunity for a role change for Two Metre Peter. Brought across from the Suns in the off season to play as a key forward and pinch hit in the ruck, Wright played permanent ruck on the weekend and looked solid.

He had the most centre bounce attendances on the ground winning 19 hit outs on the way to scoring 76 (albeit against weak opposition in McKernan and Carisle). The Bombers made a mess of the Saints so even though Phillips is now off the injury list and young Nick Bryan is edging closer to a debut, Wright looks to be the number 1 ruck at Bomberland for the time being.