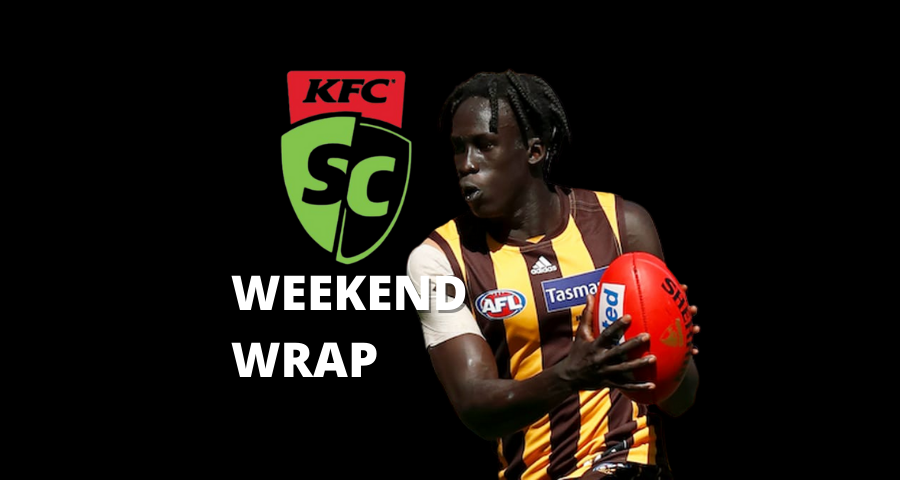 Where on earth did this carnage come from!?

Midweek there was no inclination about what was to unfold across this weekend. Sure, the weather reports were telling us it’d be the coldest day of the year but no one warned us it would affect so many players this weekend.

The carnage didn’t start with the early round games, it came at team selection. The stress began when Matt Flynn was managed out of GWS. For those of us all-in on the Flying Flynn R2 ruck strategy were hit by a bouncer we didn’t see. We just hope it’s only one week of management rather than a few. For those risky Zac Williams owners Friday night only got worse as he was confirmed a no-show for the GCS game. And then for the Sunday games we’re told Rory Sloane could be out for a month with a rather concerning injury, and he was looking so good! Then perhaps the final straw of selection was Jacob Koschitzke out of the Hawks team, causing all sorts of defensive issues for us.

In terms of actual performances carnage didn’t arrive until Saturday. The Swans kept up their good performances and cash generation for us. Jordan Ridley did his thing. As did Jayden Short. And nothing particularly drastic occurred in the Power v Tigers match, although Orazio Fantasia owners are probably done with him.

But it was a Saturday special of poor performances by a number of players we expect better from that turned this weekend. Nearly 50,000 teams are filthy with Caleb Daniel and his 19 points. Yes, 19 points! And with 79% game time! And then late Sunday he gets one week from the MRO. I’m betting he’ll be the first rage trade for most this morning. Joe Daniher owners were expecting more than 34 points from 96% match time, especially now that the game is suited to key-forwards this year. Like the Bombers did last year it might be time to say bye bye. There are others too. I won’t mention Lachie Neale, but I will mention Jordan de Goey. Ouch.

As MJ and Kane talked about on last week’s podcast, it’s time to raise the issue of Josh Kelly in these weekly wrap-ups. Let’s face it, he’s not getting the scores we’re expecting from a premium midfielder, and we can place the blame for that squarely at Leon Cameron’s feet. Why on earth Kelly isn’t one of the main midfielders and chasing down everything everywhere is confusing to say the least. Kelly scores his best when he’s in the middle and the guts of the play, at the moment that’s not happening enough. He’s averaging 20 points less per game than he did last season (114.6). It’s killing me, as I’m sure it is those other 9300 coaches.

On Sunday we saw some good scores from the ruckmen – Gawn, Darcy, and O’Brien. Fyfe, Hall, Scholl, and Petracca all scored well for their respective sides. And it seemed like a more positive way to end the round. One must feel for Luke McDonald though, within minutes of his first game back for North he’s injured again. Unlucky for those 1437 coaches who had him in their side.

Given it’s now Round 4 it’s worth making a couple of points to finish this up.

First, the Bulldogs continue to share the points around and Macrae continues his excellent form. Adam Treloar also looks like he’s warmed up and settling into his new home as part of the setup there. The Saints turned it around this week and show that there are plenty of points in them when they’re on. Jack Steele is shooting up the rankings, each week scoring better than the last.

Third, the coming week or two are vital in assessing your team and making the critical rookie downgrade trades. There are a number now struggling to meet their break-even. This is a time to analyse how best to milk that cash and maintain scoring.