Upgrade Targets After Their Bye | Round 12 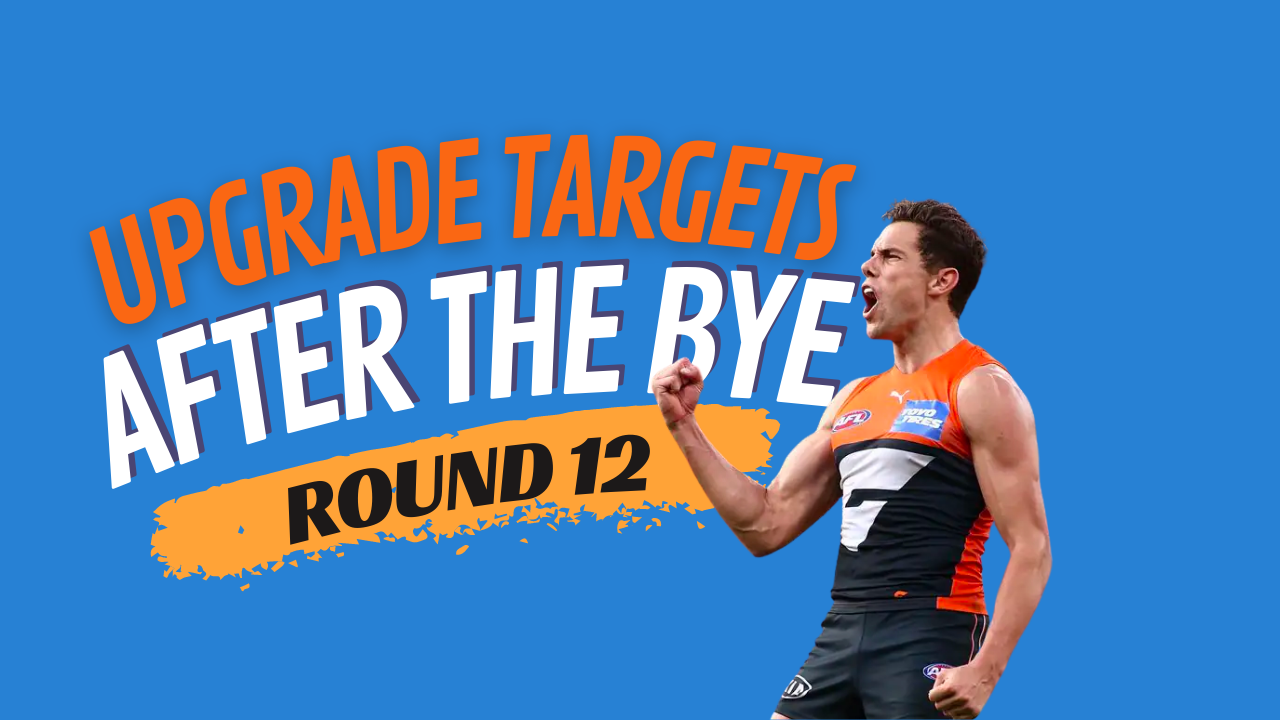 One week of the multi bye rounds is over. We now have six teams that have no more scheduled rests for the remainder of the season. Here’s a club by club breakdown of potential upgrade targets who have had their bye round.

Arguably the season’s feel-good story has been Sam Docherty’s comeback. Throw in that he’s having a career-best season in possession stats, and it’s clear to see why he’s many coaches #1 defensive premium target this week. So far, he’s had eight SuperCoach tons and just the one score under 87. While in AFLFantasy/DreamTeam, he’s had seven tons and just one score beneath 89. His scoring is so rounded and pure, so while he won’t be a value buy, he will be one of the best backs until the end of the season.

Currently, Sam Walsh is in under 10% of teams and on form of the past three games is ranked third among all SuperCoach and eighth in AFLFantasy/DreamTeam. Whenever you can get a high-end scoring premium with low ownership, you need to consider them seriously. Many coaches will chase the value of a Merrett or Wines or go for the flavour of the month, Kelly. None are wrong picks, but Sam could be the best premium over the final ten weeks of the year.

It’s been tough to have been successful so far this year without owning George Hewett. The stepping stone has outdone our wildest expectations and has probably been the best starting squad selection for 2022. By average, he’s ranked as the clear number one defender and tenth in SuperCoach. It’s this format that if you don’t own, he’s seriously hurting you. For AFLFantasy, he’s still been excellent as one of the top few defenders, but what he’s currently not done is hurt you with his ceiling. As yet, he’s still yet to score over 120. All this to be said if you don’t own in SuperCoach, I don’t believe you can be successful without him. In AFLFantasy/DreamTeam, if you want to own him, then absolutely get him, but I think he’d be someone I’d encourage non-owners to try and take on. It may hurt to miss, but we haven’t seen the Blues ‘fab five midfielders’. Perhaps we see him slide a little, and non-owners get a slight advantage.

The year couldn’t have started any better for Patrick Cripps. Beyond a one-week hammy, he was unstoppable over the season’s first two months. However, in the past three weeks, he’s struggled to reach these heights for a combination of reasons. Cripps has gone at just 79 in AFLFantasy and 92 in SuperCoach. The combination of a week off to freshen up and the likely return of Harry McKay should enable him to be back towards averaging 100+ across the formats. He’s fine to hold if you still own him, but I think there are better options priced around him.

There is only one Richmond player I have fantasy footy interest in, Jayden Short. On average, he’s ranked second in AFLFantasy/DreamTeam and seventh in SuperCoach among all defenders. He’s been one of the best early-season options, and despite just one ton in his past three weeks, I believe he’ll be among the top of the backline picks. He’s not unique, nor is he cheap, but he is bloody good to own!

We don’t have a lot of ‘premium’ forward options available to trade into from this group of six teams. But if you are desperate to bring one in, then Dustin Martin is someone to consider. Since coming back into the Tigers lineup in round eight, he’s averaged 90 in SuperCoach & 81 in AFLFantasy. That’s well below his capabilities, and if you believe he (and his Tigers) can have another hot run of form, he might be worth a punt.

A month can be a long time in football. Just four weeks ago, Stephen Coniglio was someone that coaches were eagerly looking to trade after scoring a 49 in AFLFantasy and 37 in SuperCoach against the Blues in round nine. Since then, the club’s coaching has undergone a major overhaul, and as a result, he’s been thrown right back into the midfield and scored a 145 & 85 in SuperCoach and 120 & 108 in AFLFantasy. The club has confirmed that he’ll maintain this midfield role, and with Tim Taranto still potentially weeks away, he looks like finally being the premium forward we all hoped he could be. If you don’t own him, he’s legitimately one of the best value buys of the week.

One of the most attractive options coaches consider is GWS skipper Josh Kelly, and understandably so. Multiple times over his career, he’s the ability to average 110+ for a full season across all fantasy formats. In AFLFantasy, he’s the form player in the game with the highest three-round average, with him rolling an average of 126. While in SuperCoach, he’s going at 137 in the previous three games, with only Clayton Oliver going better. He’s no longer a value pick, but if his current scoring trend holds, he’ll be among the top eight scoring midfielders for the final few months of the season.

It’d take a brave coach to reach blind and trade into Lachie Whitfield. He’s been played out of position and been sore for chunks of the 2022 season. As a result, his fantasy footy scores have seen more ‘lows’ than ‘highs.’ But historically, Lachie’s got the capabilities to be the top-scoring defensive option in the game. It’s a risk vs rewards decision for coaches. The encouraging sign is that we’ve seen the correction of both Josh Kelly and Stephen Coniglio under the new coaching regime back to their strongest roles, and the premium scoring has followed them. Will the same happen for Whitfield? Let’s hope so.

Over the preseason, arguably the most hyped player was Zak Butters and his evolution into the midfield. While the midfield minutes are there, his inconsistency in scoring is still like a rollercoaster, with nearly 100 points the variation between his highest and lowest scores of the year. A three-round average of 108 in SuperCoach and 90 in AFLFantasy/DreamTeam is good, but I’d be hesitant to want to bring him into my side. He’s got the capacity to be a top tier forward on the run home, but he’s just as likely to disappoint coaches on the run home. He’s fine to hold if you own, but it might be wise to continue on that path if you’ve avoided him to date.

You’ve got to admire what Travis Boak has done over the past few seasons. He’s been one of the most reliable 100+ performers across all game formats. This year he’s still been good with some monster scores, including a 150+ performance back in round two. He’s dropped about $100k across the formats, so he does represent value. But this year, more than recently, Port is spreading the load away from the heavy dependency on himself and Ollie Wines. The Power fixture does look quite tricky over the next six weeks for midfielders. After tonight’s clash with the Tigers, they play Sydney, Gold Coast, Fremantle, GWS and Melbourne. He’s certainly an option, but I like others more, including his Brownlow winning teammate.

When Port Adelaide drafted RUC/FWD Brynn Teakle last week, it was a huge win for coaches. This is for two reasons! Firstly, he’s a RUC/FWD DPP, which enables coaches to move Tim English easily into either of these positions should coverage be needed. Second, he’s also at a team where he’s a genuine chance to pinch a game or two. Sam Hayes has been left out of the side this week, while Scott Lycett is still four weeks away. If you have Sam Hayes at R3, even if Teakle doesn’t play, it’s quite a good trade move. It opens up cash for upgrades and squad versatility. #Winning

Over the past 18 months, the top fantasy selection from Port Adelaide has been Ollie Wines. His seasonal average is down significantly compared to last year, but that’s due to an injury affected game against Melbourne in round four where he got subbed out. Excluding that game, he’s averaging 105 in AFLFantasy & 110 in SuperCoach. He presents value given his non-injury affected average & is someone to seriously consider if you believe he and the pear can get back to previous seasons performances.

When the round 12 lockouts lifted, plenty of coaches went straight into their midfield and traded into Zach Merrett. And with good reason to, for the better part of his career, he’s been one of the safest 110+ averaging players in the game. A sub 60 score in round nine against the Swans is the primary driver behind his current price point. Outside of that game, his lowest score in AFLFantasy is 92 & SuperCoach it’s 99. The fixture ahead isn’t easy for the Dons, but of all their midfielders, he’s the most bulletproof for scoring and has the best scoring basement. A perfect example of ‘buy low’ on premiums and get an outperforming return on investment.

It feels odd to say this after his breakout year in 2021, but people are sleeping on Darcy Parish this year. He’s currently on a run of eight consecutive SuperCoach hundreds, with the lowest being a 109. The 10% of coaches currently owning have loved his season, given he also hasn’t dropped his scores under 97. In AFLFantasy, he’s had some more lowly basement games but still hasn’t fallen under 80 all season. Of his eight tons this year, six have been over 110, including a 131 & 146. It might be tough to pay up to him when his teammate listed above is of insane value. But he’s a prospect to consider for those with no salary cap worries.

Some potential value might tempt some with Mason Redman. He’s scored two tons and an extra over 90 across the formats in his past three. However, as good as his form has been, I wouldn’t be targeting him in classic. The potential volatility of Essendon gives me no confidence in trading into him.

You want premiums to be captaincy candidates when you pay the top price for a midfielder. Brad Crouch has had a strong season; in SuperCoach, he’s scored six tons and has had one score under 96 all season. In AFLFantasy, he’s also posted six tons and dropped his scoring below 87 just once. However, despite his good season to date, he’s still just averaging 104-105 across the formats. So as good as he’s been, he’s not a captain option, nor is he a value pickup. Therefore, it’s hard to get behind it.

If there’s one St Kilda player you want to trade into, it’s Jack Sinclair. The running machine is ranked fourth in SuperCoach and fifth in AFLFantasy/DreamTeam for defenders. But it’s his more recent form that’s got coaches salivating at the possibility of trading into him. Over the past three matches, he’s got the highest average among all defenders across the formats. He’s been running at an average of 128 in SuperCoach and 118 in AFLFantasy. He’s not cheap, but he’s been an absolute beast this year.

Ever since Paddy Ryder became a Saint, it’s been well documented that Rowan Marshall’s scores are heavily impacted when Ryder plays versus when he misses. This year he’s averaging 17.2 points per game less in AFLFantasy and 21.3 in SuperCoach when Ryder plays. So unless Paddy is missing major chunks of the run home, I cannot advocate for trading into Rowan Marshall.

From the current reports, Jack Steele is still a few weeks off from returning. You should have completed your midfield by the time he’s ripe and ready. Perhaps a luxury trade target later on or if a premium cops an injury or suspension.