The festival of football continues, and for fantasy football coaches we’ll have under 24 hours between lockout lifting and the upcoming round commencing. To help coaches through round 11, let’s look at the players that are ripe for the picking and ready to be traded into your side.

The best premium defender to trade into your team for the second week in a row is Geelong Tom Stewart. Even though he is still to have a week off with a bye round and he was down on performance last week. I still think he’s the best bet if you have to trade a defender in this week. The positive for buyers is that his low score has just made him more attainable, so if you were keen last round, but could get him, see the positives. Buy now!

To be truthful, this isn’t the round to target defensive premiums. In just a few days a value trade of Zac Williams or getting the one of the Swans pair in Callum Mills or Jake Lloyd post-bye is a much more potent pick. That said if I had to make a recommendation, then it would be either Shannon Hurn or Luke Ryan. Both have had moments of scoring brilliance, but have also had multiple games where scoring has been below par. At their prices, there is minimal risk, but honestly, I’d be looking elsewhere.

Sam Docherty started thew year on fire, but has slowed a little over the last month. If you didn’t own him you can be in one of two schools of thought. Firstly, you went against the popular pick for a reason and given his low scoring of late you should continue to back yourself in and go against the most popular defender in the game. Conversely, he’s now priced similarly to what he started the year and while his current scoring trend isn’t great you know what he can do. In SuperCoach he was averaging 129 after the first four games and 97 in AFLFantasy/DreamTeam. It’s a defensive trade to bring him in, but given what he’s shown it could be inspired.

One of the most popular owned midfielders in all forms of the game is Carlton Skipper Patrick Cripps. Due to a variety of circumstances, his output this year hasn’t been what initial owners were hoping. However, a price drop of $100,000 in AFLFantasy/DreamTeam and almost $150,000 in SuperCoach is an exciting prospect to consider. While he’s value in all formats, it’s SuperCoach that he certainly is one that most excites. Priced at $488,500 and coming off his first ton (149) in a month of footy. A breakeven of 68 means now is the time to pick him up as he comes up the Eagles, Dockers and Suns in his next three.

Another midfielder off the bye is Tom Mitchell. Anyone that has placed fantasy football of any format for more than two seasons knows the damaging scoring potential of ‘Titch.’ In SuperCoach, he’s down about $62,000 on starting price, and with an average of 114 and only one score below 95 all season it’s hard to see a downside. Especially, seeing as though he’s scored five tons from his past six matches including a season-high 164 the week before the bye. In AFLFantasy/DreamTeam he hasn’t quite lived up to the hoped return given he’s had only three scores over 80.

Given that about 50% of DreamTeam and AFLFantasy coaches own him, it hasn’t been as devastating to coaches rankings. The positive for buyers in that of his two tons scored from the year; they’ve come inside his past four matches. Given the seriousness of his broken leg, he was always going to be a slow starter. Is now the time to jump on? In DreamTeam his price has dropped $50k, and he has a breakeven of 61, while in AFLFantasy, his breakeven is 59. Safe to say if you want some bacon now ios the time to get on Titch.

Mitch Duncan still provides value, and last week even after a slow start managed to squeeze a 90+ score across the formats. Speaking of value West Coast pair Luke Shuey, Tim Kelly and Elliot Yeo are still priced below their output. However, if you’ve got some clash to splurge, perhaps from injured Adam Treloar then maybe Andrew Gaff is more your fancy. He flew out of the gate this year, averaging 102 in DreamTeam/AFLFantasy and 121 in SuperCoach over the opening four games of the year. Since then he’s averaged 87 SC and 75 AF/DT in the last five. Since dropping $70K+ off his initial price, he still presents the value, and with plenty of games at home, he could be the perfect pickup. Just beware a potential Ed Curnow run with the role this week.

At the start of the year, I wrote about Nat Fyfe in the 50 Most Relevant. In it, I spoke about Fyfe being a damaging scorer, but having questions over the physical ability to get through the season without injury. As 2020 owners can attest, that trend has continued. This year he’s already missed multiple games. While Fyfe is value, and he is a proven performer. However, the history of missing games due to injury is starting to make him too difficult a player to trade into your team midseason. For me, he remains as a player that I’m happy to consider in my starting squad, but not an upgrade target. He’s every chance of missing further matches based on current historical trends.

Have we not learnt anything this year? That value rucks in 2020 have worked out for a week or two, but nothing more. Moving away from the 3G’s is filled with risk. Todd Goldstein, Max Gawn and Brodie Grundy are far and above the best ruck candidates of the year. As good as Tim English or Marc Pittonet and even Sam Naismith may have been at their price, they only delivered the scores required for a few matches.

All that said, if you need a ‘value’ ruck then Sam Draper is the obvious candidate. He rucked solo against the Giants and the week earlier looked more than comfortable role sharing with Tom Bellchambers. If you are considering dropping down to Draper, the key is to nail the other premium upgrades that freed up cash allows you.

If you wanted a unique, but more expensive candidate, then St Kilda’s Rowan Marshall might be it. Over the past three weeks in SuperCoach, he has scored 160, 90 and 143. While in AFLFantasy/DreamTeam he’s posted 95, 82 and 82. It’s still not matching with the big boys, but he’s the closest we’ve got.

To be fair, NicNat is a genuine option in SuperCoach. Two scores over 135 showcase his scoring potential. However, with four scores between 84-87 his limited game time will always limit his scoring output in certain games. So while he’s an option, it’s not one I’d advocate for.

If you play SuperCoach and don’t own Jy Simpkin this is the week to pick him up. At the end of round 6 he was averaging 119 and was ranked inside the top 10 for total points scorers. An ankle injury is the primary cause of his poor scores over the last few weeks. However, last round against the Cats in the final three quarters he started to get back to his scoring best. At under $400k and as a DPP MID/FWD there is zero risk in this selection. Jump on

Over the past few years, some players have shown a trend that they start the year scoring slow before tearing it up on the run home. One of these players is Dustin Martin, and the trend is already beginning to show again in 2020. Last year he had just one AFLFantasy/DreamTeam ton and two in SuperCoach over the opening seven rounds. However, from round eight in AFLFantasy/DreamTeam the following six weeks, he scored 135, 109, 105, 102, 140 & 128. While in SuperCoach it was 128, 92, 113, 97, 108 and 100. Focussing back on 2020 he’s coming off the back of some of his top scores of the year.

In AFLFantasy/DreamTeam he’s scored 90, 100 and 81 in his past three making his three-round average of 90 placing him as the second most from forward in those competitions. In SuperCoach he’s coming off the back off a 108, 186 & 111.
Currently, he’s cheaper than breakout player Andy Brayshaw in all formats of the game. If you want to own Dusty, this is the week to do it before his price skyrockets!

It’s one I’m a big fan of in SuperCoach, and that is trading in Connor Rozee. Before you lose it at me, please hear me out. Including this week we’ll have a likely four more rounds of ‘byes’ meaning another best 18 scoring rounds. These are perfect for players who have a high scoring variance like Connor. Yes, his floor is putrid, three scores between 30-39 are not wanted. But in the best 18 formats, these low scores should fall out of your team. Don’t look at the downside; look at the upside. For less than $100,000 you can move injured Sam Sturt to Rozee. Cast your mind back to the opening two games of the year where he scored 125 & 145, that’s the type of ceiling you need in best 18. While in the fuller scoring rounds, he becomes a good scoring bench option. No downside at this price.

In the same vein, Chad Wingard offers plenty of potential upside across all formats of the game. However, my only caution is that his big scores came when he was either getting significant midfield time on he kicks a bag of goals. In a best 18 format I don’t mind him in SuperCoach especially, you’d have to own Jy Simpkin and the other dominant forwards of the year in Lachie Whitfield and Christian Petracca. 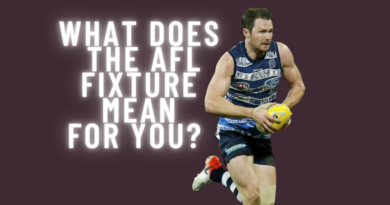 What does the AFL Fixture mean for each fantasy football format? 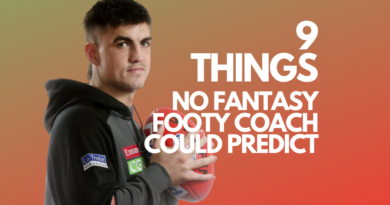