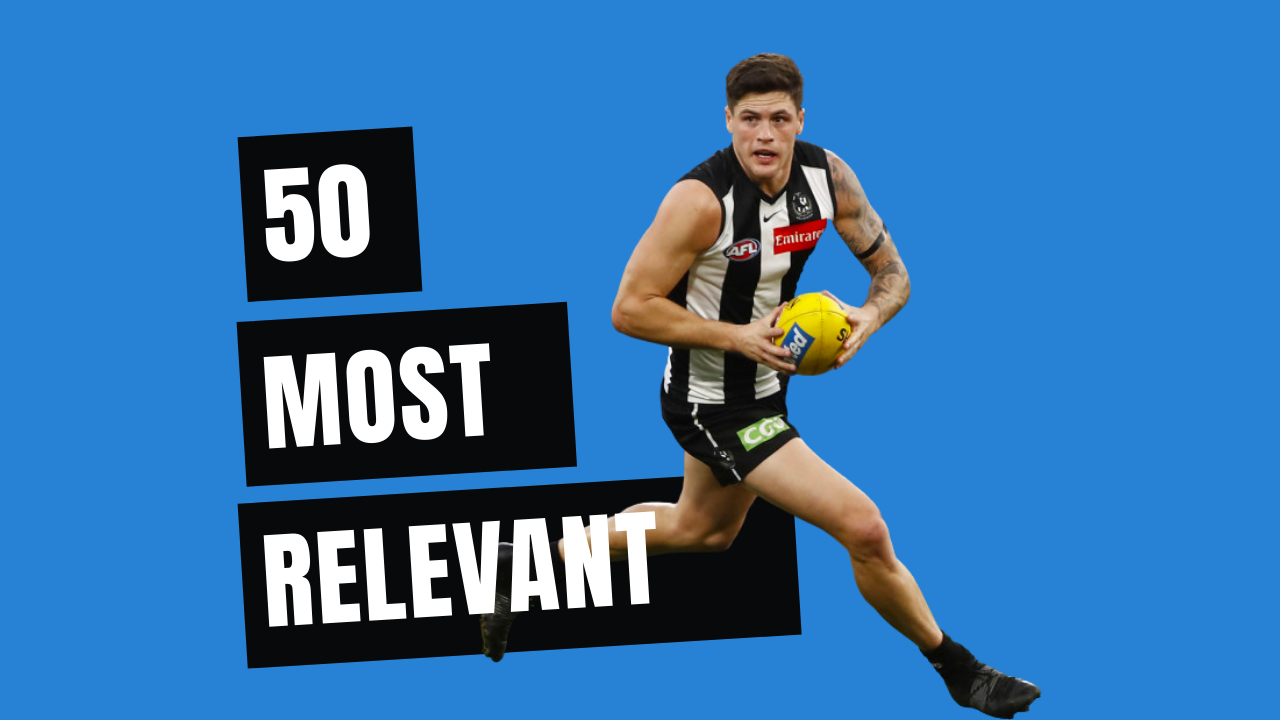 Since 2015 when Jack Crisp joined Collingwood, he hasn’t missed a game! Seven seasons of elite durability. To go with it, he’s coming off the back of his best-ever fantasy footy season. 2022 has already been forecast as a year that will challenge even the most astute fantasy coach; perhaps Crisp is the consistent piece your team needs to help you thrive.

Jack Crisp has become a crucial member of the Pies team since joining the club back in 2014 as part of the Dayne Beams trade. Over the past seven seasons, he’s been the Mr Fix It of the club covering roles from all three portions of the ground. His primary strengths are his ability to apply defensive pressure on the ground, to defensively beat his man one-on-one and then distribute the ball with his booming left foot.

In 2021 Crisp had a mixture of roles, in the front half of the season, he was a regular staple of the centre bounce rotations, while as the season went on floated back towards his more traditional defensive role. Over the year he attended 40% of centre bounces, and he was someone who before the positions were announced in December was losing defensive status. Thankfully, the boffins at champion data have let him retain this status while also adding the midfield eligibility allowing immediate in-season flexibility to go with his high durability and strong scoring capacities.

It was a record-breaking season from Crisp in AFLFantasy/DreamTeam. He is the number one ranked defender by total points and ranked second by averages. His average of 101.7 was constructed through thirteen tons, four of these above 120 and an additional four scores between 90-99.

The SuperCoach season from Crisp was even stronger. His average of 104.9 has him ranked as the sixth-best backman by averages, but by total points, he’s the #2 option available. He’s less than 50 points shy of Daniel Rich with the most points scored of available defenders. Over the year he scored thirteen tons, five of them over 120 and an additional three scores over 90. His lowest score of the season was 79. To have that level of the scoring basement in any line, let alone defenders is elite!

As an interesting aside, in the first portion of the year his centre bounce attendances especially pre bye were more pronounced. While they were still there afterwards, he clearly spent more time in the defensive fifty roles. The reason I bring this up is before the bye from his thirteen games he averaged 100 across the formats. However, in the nine matches post-bye he averaged 103.5 in AFLFantasy/DreamTeam and 112 in SuperCoach. Normally being in the midfield is a good thing for a scoring increase. But based on the numbers, perhaps Crisp is better when his time is a little more split.

While 2021 was a breakout season for Crisp, he’s had multiple seasons of strong scoring

During the 2020 in AFLFantasy/DreamTeam he posted two tons, plus had four additional scores over 80. Remember that in shortened quarters last season that 80 was the new 100. By the end of the year, he ranked third among defenders for total points and sixth for averages. It was a strong season from Crisp in SuperCoach. He posted 8 tons, 3 of them were above 120 and had an additional 4 scores over 90. On top of his scoring heights, he barely burnt coaches with a poor score. Just one all season did his scoring drop under 60. By the end of the year in that format, he ranked 7th among all defenders for total points and 11th for averages.

Since being a Magpie his seasonal averages have been fantastic. In SuperCoach he’s delivered 89, 85, 82, 95, 88, 99 & 104.9 . While in AFLFantasy/DreamTeam it’s 91, 84, 88 87, 97, 76 (95 adjusted average.) & 101.7. However, the cream on the op of all his scoring is the flawless gaps in his availability. Since joining the Magpies back in 2015 he’s had immaculate durability. He hasn’t missed a match for seven years playing 163 consecutive matches. The closest to him is Clayton Oliver with 111. when you pick Crispy, you get 22 games and a worry free defensive selection. By owning him it removes one headache from your season.

Jack Crisp has the scoring to match it with the best, but his durability sets him apart. It’s incredibly rare to have this level of availability. How many times have you had to make a trade due to an injury? For example, Tom Stewart played 20 games, Dyson Heppell played 18. While it was, Lachie Whitfield and Shannon Hurn play played just 15. Using bench cover regularly for premiums missing multiple games is one of the ways you slide your scoring quickly. Even worse is regularly tradings premiums out with injuries. Historically with Crisp, neither of these happen. When you pick Jack, you get 22 weeks of him.

Go back and look at those averages; he’s played every game and has the clear top availability of any premium defender. While this could change entering this year, it should give potential owners high confidence that when you pick him as a premium, you’re getting 22 games from him.

New Collingwood coach Craig McRae has spoken about a change in the midfield. Most notably, Scott Pendlebury will have his fair share of time coming off the halfback line. In the same article, Crisp clarified his role as a rotation between the backline and a midfielder.

2021 has given coaches a bounty of solid premium defenders, many with a case to suggest they’ve still got. I think we’ve got some brilliant premiums, all with upside. Aaron Hall had the best ceiling frequency of any defender in the game; as discussed earlier this preseason here, post role change, he was unstoppable and still offers value. If the departure of Jordan Dawson means a rebound of scoring for Jake Lloyd, then his price point is irresistible. Lachie Whitfield is one of the best players in the game. In almost every round he’s capable of scoring 180’s. Jordan Ridley, Dyson Heppell, Jordan Dawson and Jayden Short have all been covered through this series. All have compelling stories of how the scoring can improve significantly. The same cannot be said for Jack Crisp. Arguably he’s priced at his maximum output.

In 2022 I honestly can’t advocate for coaches to start with more than three defensive premiums. The above options present the greater upside in scoring based on price. So as good as he is, I can’t select him over some of these names at his price.

But if Crisp is ranked higher than these names, what makes him more relevant? Great question. Remember, success in salary cap formats is based on the timing of trades. With Jack, don’t buy high; buy low. And given his historical scoring and durability, he is a perfect early season upgrade target.

Every coach drafts with a differing mindset. Some value scoring ceiling capacity. Other coaches highest priority is to have players with minimal scoring deviation. While others, the greatest weapon is the durability and availability of games. None are wrong, all have merit, but all are different and mean specific markers trigger different guys to get picked differently.

With Jack Crisp, he won’t be one of the first few defenders taken, and I’d be shocked if he went inside the top selections overall. But I suspect he’ll become a popular pick by round three.