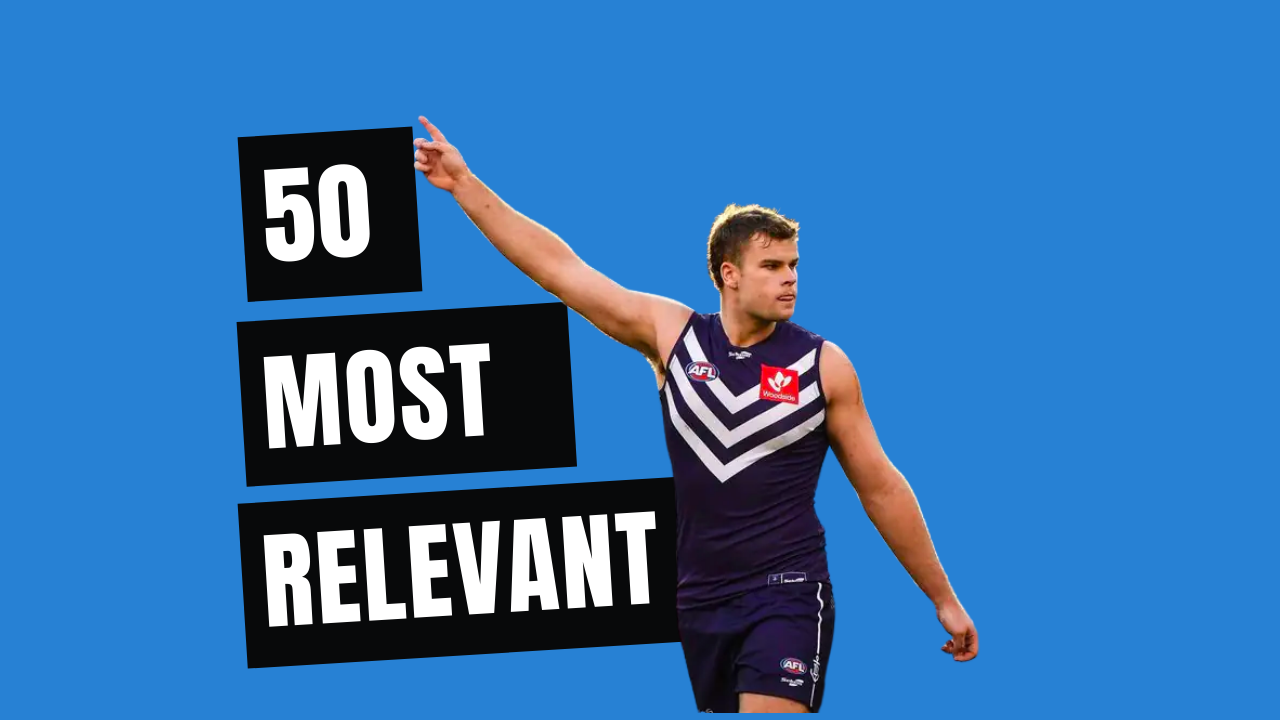 In 2021 we saw the emergence of plenty of new top-end premiums. One of the most surprising was the season of Fremantle ruck Sean Darcy. After overcoming his poor injury history, is the Dockers destroyer ready to take his game up to even stronger scoring levels?

If you’ve played any draft format of the game, then you’d be familiar with Sean Darcy and his fantasy prospects. The question was never around if he could score. If you deliver a 114 in AFLFantasy/DreamTeam & 99 in SuperCoach in your second AFL match, you’ve got scoring capacity. Instead, the concern was can his body let him live up to his promise? With just 41 games in the past four seasons, it wasn’t looking strong in 2021.

Thankfully for him, the Dockers and the fantasy footy community, he put together a superb season. He averaged 16.6 possessions, 28 hitouts, four marks and three tackles per game. He ranked sixth across the league for total hitouts, winning more than Scott Lycett, Tom Hickey and Reilly O’Brien. While also finishing eleventh for total contested marks.

From an AFLFantasy/DreamTeam perspective, his average of 93.9 has him ranked third among rucks behind Brodie Grundy and Max Gawn. He delivered nine tons across his twenty-one games, three of them over 120 plus an additional four games where he scored between 90 and 99. That’s a good season, but he had an even better one in SuperCoach.

Darcy averaged 118, which in the game is currently the seventh-highest! His year consisted of fourteen tons; nine of these were over 120 and an insane four that was 150+ including a 183 & 193. To go with this high scoring ceiling was four other games where he scored between 90-99, and in only two games, his scoring dipped below 80. Last year, there was a three-round stretch where he put up some unbelievable numbers. Between rounds 16-18, he averaged 177 and the lowest score of 156.

He’s got the second-highest average of all rucks (yep, he’s ahead of Brodie Grundy), and his average is higher than the following players that have already been added to the 50 most relevant. Jarryd Lyons, Rory Laird, Zach Merrett, Darcy Parish, Callum Mills & Cam Guthrie. Over the past few seasons, nobody has got close to touching the top two rucks. But with Darcy, the ability to match, let alone surpass one of Grundy/Gawn, is looking increasingly possible. Perhaps in 2022, he will have a new king in the ruck division? If we do, there’s every chance that Sean makes it happen!

The scoring ceiling of Sean Darcy isn’t only comparable to the best rucks in the game, but it’s as good as some of the best premiums in the game. Rarely can a player outside of the midfield line show multiple scores in a season north of 130 in AFLFantasy or 150 in SuperCoach.

Earlier, we discussed the previously poor injury history of Darcy. Still, after playing 21 consecutive games last year, I don’t believe you can have that as the primary reason for opting out of selecting him. He’s now shown the ability to back up week after week, month after month and even plays through some serious in-game knocks. After all, as a physical ruck style, his game style as a heavily contested player will always lend itself to knocks and bumps.

However, if you still have durability concerns, the equation is simple: start Darcy or rule him out entirely. For players with a history of missing multiple games, you need to bank the opportunity to maximise the number of games he plays by starting him. The mathematical variance and likelihood of him missing through injury will only increase based on each game. It’s why if you’re worried about missing games, start him, bank the points and then trade if the injury hits.

By opting to go with Darcy, you choose to forgo Grundy or Gawn. One element that generally would’ve helped is sitting on a differing bye round. However, that’s not the case. Sean’s Dockers are always taking the week off in round 13. So you’ve only got two viable structures this season when it comes to ruckmen. A set & forget pair of premium rucks or a premium ruck at R1 paired with some that offer value at R2. Some might consider a viable starting ruck combo of Jarrod Witts and Braydon Preuss. Still, as potentially feasible as it might be, it’s only in AFLFantasy could I advocate for that.

Using the highest ownership percentage as a guide, Brodie Grundy is viewed across AFLFantasy and SuperCoach as the #1 ruck to start with. Let’s hold that as a premise and suggest he will be one of the best two premium rucks. I think Grundy is the safest premium ruckmen in 2022. So I’m very comfortable with this assumption. Before you can consider Darcy, you need to have a narrative about what you believe will happen this season with Max Gawn, who was the top ruck across all formats last year.

‘In 2021, Max averaged 120 in SuperCoach and 108 in AFLFantasy. The regular storey I hear in the preseason I hear surrounding Gawn is that he’ll regress on the back of Luke Jackson picking up more centre bounce moments as he continues his strong progression. While that might be the case, I am baffled to see some suggestions that means Gawn falls so far back to the pack that he’s not a supreme option. Even if that does happen, he is still a dominant presence up forward; remember his preliminary final against the Cats? A bumper five-goal performance, a 145 in AFLFantasy/DreamTeam, and 159 in SuperCoach. ‘But MJ‘, I hear you say, ‘that’s just one game, that’s not enough data to make that assumption.’ Maybe, but many are happy to do the same based on Luke Jackson’s Grand Final.

I can’t advocate for Darcy as an R1 in your starting squads. Others might be able, but I cannot. As good as I think he can be, by selecting him at R1, you’re locked into him being a certainty as a top-two ruckman. I’m not convinced he’ll be better than Grundy, and I’m not sold that any regression of Gawn is sufficient to make Darcy a clear superior pick. This is one of the reasons I’ll be targeting him as an upgrade.

The other core reason is that set & forget rucks is a strategy you can bypass in 2022. This season, Braydon Preuss is an absolute no-brainer pick at R2 if named round one. Picking him enables coaches the salary cap space to invest in other lines. I’m aware of the battle for ruck spots, but for me, Preuss is a clear clubhouse leader. Braydon’s seemingly clear path as value ruck and the other premium rucks I still have more confidence in ahead of Darcy means I cannot start and must target him as an upgrade.

If I had to start him in one format, it’d be SuperCoach; it’s this format he could be a beast. Currently, 28% of coaches own him and all power to them for doing it. I think he’ll be great, but I’m choosing to ‘check’ and see what other cards are dealt my way before going ‘All in’ on Darcy.

You sit in one of two camps for ruckmen on draft day. Camp one, you value them highly and look to secure one of the premium options as soon as possible. The other, you care little for them and look to ‘punt’ a ruck selection with one of your final on-field picks. Once Brodie Grundy and Max Gawn, it’ll then be time for coaches to consider taking Sean Darcy.

Once Gawn and Grundy are off the board, coaches will draft Sean Darcy. Depending on what format you draft will determine what happens next. In SuperCoach, he looms as the clear#3 ruck option. However, in UltimateFooty, where Rowan Marshall is an RUC/FWD, there’s a genuine conversation for him to be taken ahead of Darcy.

Darcy’s drafting range will float between the middle of the second round into the late third. One thing’s for sure is he won’t be available in the same range of 2020, where his ADP was 223 in UltimateFooty.