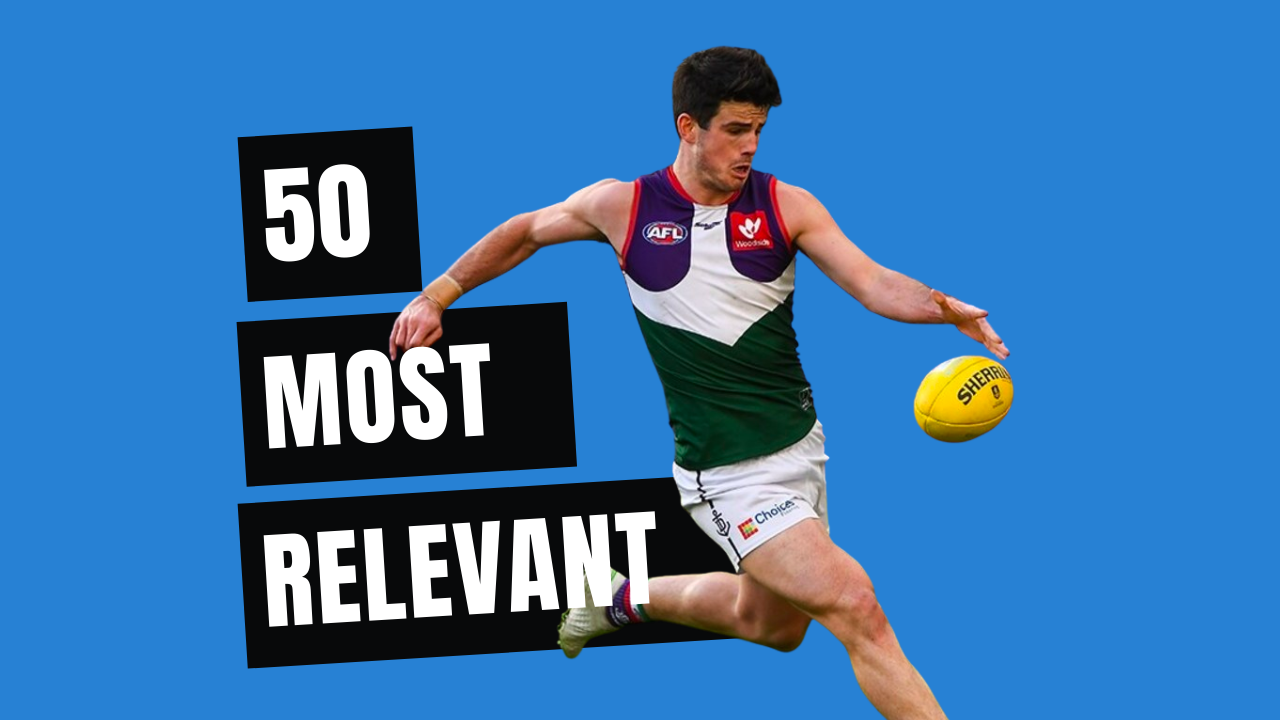 The fantasy football pedigree of Andrew Brayshaw is evident as he’s already broken out as a premium midfielder. The question now is can he elevate his abilities to the next tier of uber midfielders?

There are some players in the AFL that are impossible to dislike. Andrew Brayshaw is undoubtedly one of those. The way he leads within the club, the workrate he shows on the field and then who could forget the famous Christmas Day “Brayshaw family’ sprint sessions. These, plus the way he responded to the infamous ‘Gaff Gate’ incident, makes him very easy to want to wish him every success.

As a footballer, Andy is starting to show that he’s the complete midfield package. In just his fourth AFL season, he ranked seventh for uncontested possessions, eleventh for effective disposals and thirteenth for disposals per game. This combination of stats highlight his high workrate to get into space, and then when he does have the ball in his hands, he’s a reliable and effective distributor.

He scored 13 AFLFantasy/DreamTeam tons; five of them were above 120 and two higher than 135, including his personal best 156. In addition, he had three more scores between 90-99. That’s 80% of his scores, either 90 or above, last year. From a scoring basement, he had three scores under 70. All of these were when he copped a heavy tag. Closing out the season, he averaged 104.2, higher than Andrew Gaff, Jy Simpkin and Josh Kelly.

For SuperCoach, he scored twelve tons, with a lowest of 109 and that top score of 190. He had seven tons over 120, four additional 90-99 and just three scores beneath 70. His 107 is ranked nineteenth for all midfielders but is higher than Travis Boak, Nat Fyfe, Patrick Dangerfield & Lachie Neale.

This 2021 scoring follows on from his breakout third season of 2020. That year he verged 101 in SuperCoach and scored ten tons, while in AFLFantasy, he averaged 76,4 95 adjusted) and score three tons + five additional scores over. 80. Don’t forget that 80 was a comparable ton to a regular season in the shorter games.

The season was strong but rounds 5-14 gave fantasy coaches what we saw in 2021. During that nine-game stretch, he averaged 118 in SuperCoach and 89.6 in AFLFantasy/DreamTeam, or if you like, adjusted averages that a 112. So the scoring power is there and is proven, now is the time for Andy to elevate himself to the next tier of midfield premiums. With some increased consistency, he could quickly push into the top ten midfield premiums this year.

Much has been made in the fantasy footy community about the famed ‘their year breakout.’ And as much as we do have data backing up the claim, it’s the fourth and fifth seasons that players establish themselves as dominant premiums. Andrew Brayshaw is following along right on pace with the likes of Scott Pendlebury.

While the trend is proper and healthy, there is one significant question mark, that’s about he goes handling the tag, last year, he copped three heavy tags, and in everyone, he struggled along. In two of them, he even failed to register a 70. This was the first time in his AFL career that he received this attention. Given his high work ethic, he’ll have spent alot of the preseason working through ways to limit the impact of tags should opposition coaches send them towards him. Remember, players will have good and bad games, But If his basement can become an 80, he’ll become a 110 guy across formats even without increasing his ceiling.

I’m not convinced that the absence of Adam Cerra will have any bearing. In the four games he played without Cerra last season, he averaged 2.2 more points per game in AFLFantasy/DreamTeam and 4.5 in SuperCoach. With Cerra now at Carlton, I’m intrigued to see just what the dockers midfield rotation looks like. Many believe Nat Fyfe is sure to be heavy in the forward line. I’m not as convinced. For Freo to still push for finals, it’ll still require Fyfe to be a heavy midfield presence. Without him there, the midfield is too shallow.

It’s a question of ‘when’ not ‘if’ Bradshaw become a top tier premium. Coaches jumping on him this preseason are convinced that it’s 2022. And if that’s the case, you’ll need to be comfortable that he’s someone you can out the VC/C on most weeks. Fremantle plays four of the first five rounds as a late Sunday game for those curious. So, in reality, he’ll not be a VC candidate in the first month. After that, it’s captaincy or bust, given that fixture.

I’m confident in him delivering a 110+ season this year, and in several formats for me, he’s right in starting squad considerations.

Based on his seasonal average from 2021, coaches should land Andrew Bradshaw as an M2. However, there is a world where he could even be an M3 in the right league if you’re drafting a heavy midfield approach and others are locking away other lines.