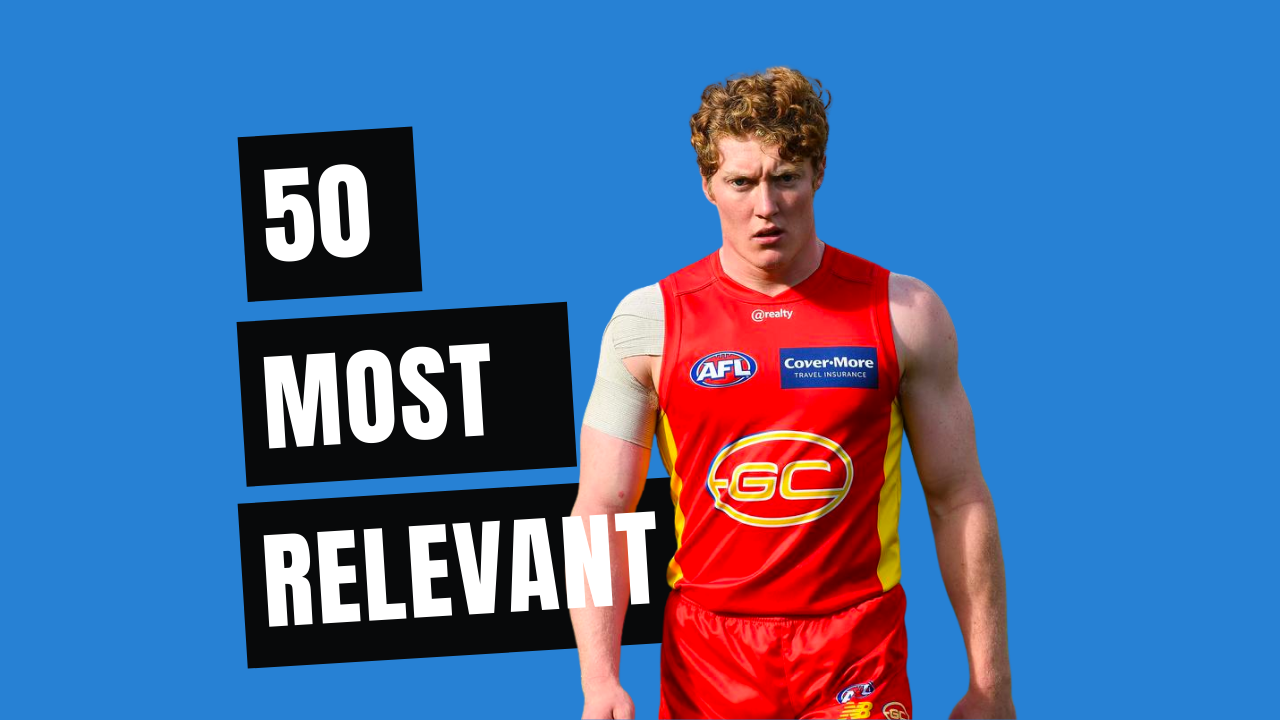 Over the past two seasons, the year hasn’t gone to plan for Matt Rowell or fantasy footy coaches that owned him. So now, finally, injury-free and enjoying his first full preseason, is it finally time we see the unleashing of the fantasy beast?

Matt Rowell has made it into the 50 most relevant for the third season running. And if he can deliver some scoring reflective of his opening few AFL games or his junior career, then he’ll make this list for many seasons to come. At his best, Rowell is a clearance and contested footy beast who’s already shown abilities that players of his age shouldn’t possess.

Sadly, 2021 was nearly as frustrating as 2020 for Matt at the Suns. After having an interrupted preseason, he finally got himself ripe for round one. However, he was out for the next few months with an early knee injury. But throughout the season, he never really got going. He had just one match from his twelve games that he had over 20 possessions. In AFLFantasy/DreamTeam, he averaged 55 and failed to register a score above 80. While in SuperCoach, his average of 63 consisted of just two scores north of 80. These aren’t great, but let’s remember how hard it is to come back from a long term mi season injury.

For example, Josh Dunkley’s early season form last year has been well documented. Still, in the six games returning from a long term injury, he averaged a mere 61 in AFLFantasy/DreamTeam and 67 in SuperCoach. It’s a similar trend for Dylan Shiel, who was also out for multiple months. However, post-injury, he averaged 62 in DreamTeam/AFLFantasy and 67 SuperCoach. Therefore, I propose that the narrative around Rowell shouldn’t be about how poor he was last year. Instead, he should be applauded for how tough it can be to come back and play AFL.

The reason coaches are so bullish on Rowell is they remember his start fondly to 2020 and his final under 18’s season performance,

After the first four rounds of 2020, Matt Rowell showed that he was on track not just to eclipse but smash through that glass ceiling that often hits first-year players. The former #1 draft pick averaged 18 possessions, five tackles, four clearances, four score involvements, two rebounds 50’s and two inside ’50s per game. Just looking at that scoring build, you can see that he’s not a one-dimensional fantasy option. He wins it on the inside, impacts the outside and does the tough defensive stuff.

Yes, it’s only a few AFL games, but it reflects his junior career’s dominance. At the Under 18 Championships in 2019 for Vic Metro, Rowell averaged 25 disposals a game. Twelve of those were contested possessions. In the NAB League for Oakleigh, Rowell averaged 171 SuperCoach and 123 in AFLFantasy/DreamTeam. He averaged 32 disposals, 17 contested possessions, eight tackles, and four marks per game from his seven games.

Entering into the 2020 season, Rowell was one of the most excited cash cows arguably ever. Unfortunately, year two and another injury stunted his planned emergence. Maybe now, with a year of minimal AFL pressure on him, he’ll finally be freed mentally and physically to fulfil his clear potential.

Just before Christmas break, the Suns participated in a gruelling match simulation. Matt Rowell was matched up against a midfield of Touk Miller, Noah Anderson and Jack Bowes. Rowell was exceptional, winning a heap of clearances and showed no signs of the injuries that dogged his 2021. This is precisely the news prospective owners want to hear. Rowell is a monster at the stoppage in his purest form. If he’s beating players of Touk’s ability consistently, that’s a good sign.

It might only be mid-January, but Matt Rowell is among the most popular selections across all game formats. At the time of writing, it’s just AFLFantasy that’s open to the public, but he’s in 44% of teams. Anecdotally it wouldn’t shock me if his ownership percentage is comparable to the team pickers stats for DreamTeam & SuperCoach. High ownership numbers like this create two types of responses from coaches.

The first is to be bold and ‘take him on.’ With ownership that high, some might be tempted to think that they can find a comparable or stronger performer than Rowell around that similar price range. However, with so many picking him, all it could take is a slow start or injury management from the club to feel like you’ve come out ahead. Just twelve months earlier, coaches who went against Rowell were rewarded. Not only did they dodge a poor round one score, but they saved themselves a trade in the process. I’m certainly no advocate for injuries but instead highlighting the reward that could come when you go against a popular selection.

On the other hand, you can view these high ownership numbers as risk mitigation. With such a large population of the game owning him, he’s the sort of player that if he’s scoring ‘pops’ and you’re not on him, then the year starts with you playing catch up early.

Make no mistake about it; Matt Rowell is a superstar player. And for a long time, he’ll be on our fantasy sides, but is 2022 the right time? As good as he was in 2020, it was only four complete games. And last year, even with the injury impacted season elements, he was still only just OK.

As much. as there might be an element of risk about him, the reality is he is priced at a point where the risk is now minimal. At best, he comes out and delivers you a month of scores 85+. Doing so would make him a helpful stepping stone early. While at worst, his end to 2021 is reflected in his start to 2022, and he struggles. If that eventuates, he provides you with an easy avenue to the best stepping stone or cash cow to play the negative breakeven game.

His price and high ownership across formats mean he has no risk associated with him. I think he’ll be better in SuperCoach than any other format. Rowell is a must consider for coaches that need a stepping stone midfielder in any format, if not a certain starter.

Depending on when your draft day lands, he could range from coaches reaching for him at M3 or sliding on him as late as M6. I believe M4 is a solid range to target Matt Rowell.