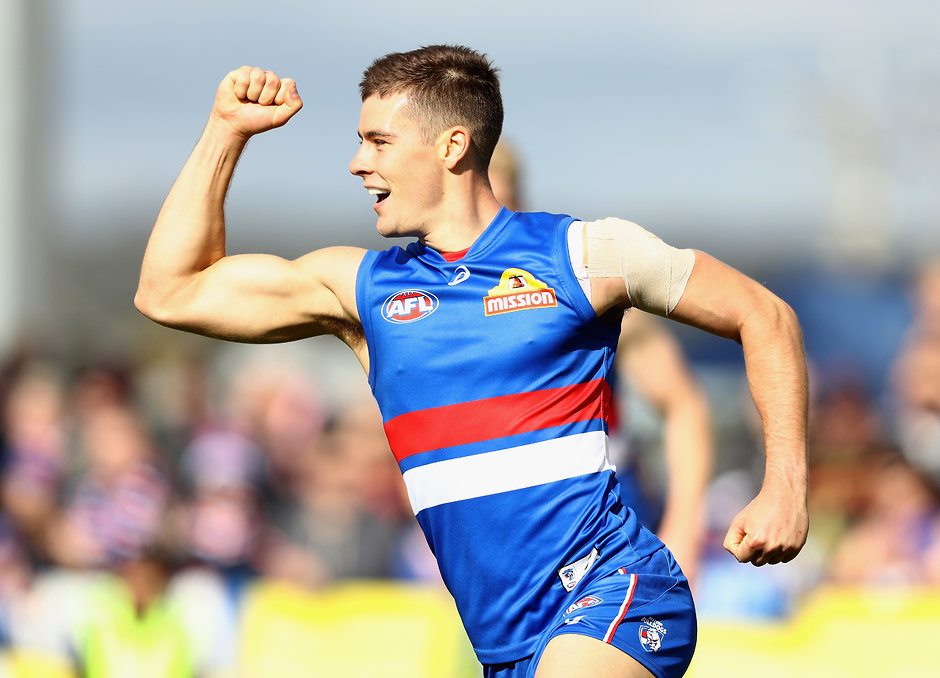 Over the final few months of the season, not many midfielders could match the scoring of Josh Dunkley. Does he retain this midfield role in 2020?

Winning a premiership in your first season is hard to top. However, from a personal perspective, it was Josh Dunkley’s most complete season so far. He averaged 28 possessions a game, 14 of these contested, seven score involvements and4 inside ’50s. Across the league, he was ranked 6th in the league for tackles, 11th for total disposals 19th in the league for contested possessions.

That was after a slow start. Over the opening six weeks of the season, Dunkley spent his time primarily as a forward.

From a fantasy footy perspective, he was averaging 77 in AFLFantasy/DreamTeam and 85 in SuperCoach. Across all formats, he failed to raise the ton during this time. Thankfully it didn’t stay this way for the whole year. From round seven onwards he was released into the midfield and with stunning scoring results.

It was an even stronger return in SuperCoach. From the final 16 matches after the midfield move he posted 14 tons, eight were over 120 and four over 150. One of these was when Dunks joined the elite SuperCoach history with his score of 202. He had only two scores below 100, with his lowest 88. In terms of average, he went at 127 after the move.

Crazily he offers some growth on the starting price. Which is insane to think of when we talk about the player who is ranked 5th for total points in all formats

You can draw the line clearly that the Dogs were a better side once that midfield unit of Marcus Bontemopelli, Jack Macrae and Dukley was leading the charge. When Dunkley played forward, Bulldogs were two wins and four losses. However, once he moved into the midfield, they went ten wins and six losses.

When the Doggies won, he was dominant on the fantasy scoreboard too. In AFLFantasy/DreamTeam he averaged 121.4 in wins as opposed to 98.7 in losses. A differential of 22.7. For SuperCoach he averaged 129.1 in victories and 101.3 in losses with a differential 27.8.

Josh Dunkley is far from a one-season scoring wonder. In 2018 he showed that when he’s allowed to play as a midfielder, he is one of the best fantasy scorers going around.

As long as Marcus Bontemeppelli and Jack Macrae are in the side, he’s zero chance of receiving a tagger. That’s a positive that many premium midfielders don’t have in the modern game.

One of the things that helped the Dogs win them the premiership in 2016 was the versatility and flexibility of their players. The negative for fantasy coaches is when players are used in multiple roles unpredictably it can be challenging to have confidence in the selection of a player, especially if one of those secondary roles isn’t fantasy-friendly.

The most significant question mark surrounding Dunkley isn’t his scoring capacity but instead whether or not he’ll have the role that he so well played towards the conclusion of 2019.

Twelve months ago, when Dunks was in the fifty most relevant, he was coming off the back of a storming end of the year. Many believed he was a lock for that midfield role, however, as we know that didn’t eventuate the whole season. Now entering into 2020 it feels like deja vu. Despite him being a genuine candidate to be the top scorer in all formats, the question mark about his role is as real now as it was twelve months ago.

You could build a case that he’s a has more risk now in a selection than he did 12 months ago. As a forward last year, the chance of him not getting midfield time meant that when he got the 70-80 scores, it didn’t hurt as much. Besides, you were only paying for him at an avg in the early ’90s. Now, he’s a premium midfielder who’s starting over 110-115 average. A forward role early would cripple your starting squad scores.

There are risks involved in selecting him, and to be fair, almost every player has an element of risk. That being said, I’m confident in choosing Josh Dunkley in 2020. The Bulldogs looked phenomenal at the end of last season, and the tight midfield of Macrae, Bont and Dunkley was a core reason for the success.

It’s not very often you can argue a guy priced at over 110 is substantial value, but with this selection, you can. I believe Josh Dunkley will average over 120 in 2020. Because of that, I’m starting him.