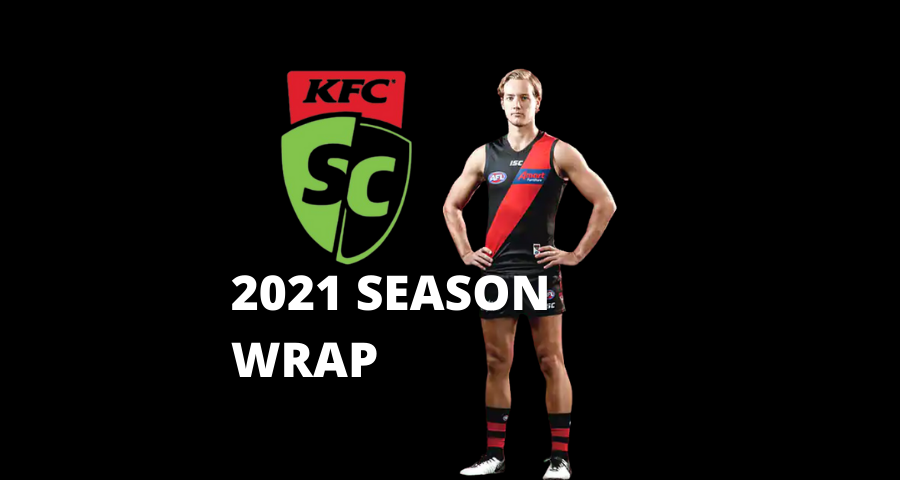 With the Supercoach season complete what better time than now to do a review. After all, the clubs are doing their performance reviews this week (some better than others by the sounds) so why wouldn’t we serious coaches do the same!

This season wrap looks at two things. (1) What was; that is, the players’ scoring and how it all ended up in terms of rankings. And (2), what could’ve been; those opportunities that were provided for us or those harsh realities of injury and selection that dealt us a tough blow. This is probably the more triggering part as we look back on our decision-making and the bad luck we were hit with.

What Was – The Player Rankings

Rory Laird was the best defender by quite a margin, averaging 116 from 22 games. He was also the ninth best midfielder too, and as a DPP he was an extremely valuable player to have in our side. It’s no wonder nearly 60% of us had him.

In somewhat of a surprise Daniel Rich took out the second best defender position. He was only owned by 13% of teams, and that’s at the end of the season. His form was solid and he ended up with an average of 107.

Jack Crisp is also a tad surprising given other defensive options we had. With Darcy Moore’s injury Crisp had a terrific second half of the season and ended with an average of 104. He was only owned by 6.9% of teams in the end and puts himself in contention for our 2021 squads.

Jake Lloyd was basically a lock at the start of the season with 50% of teams selecting him for round one. He didn’t have the year he had last year, but nonetheless he still averaged 107.8 and was the fourth best defender. A good pre-season and he’ll be a shoe-in again next year.

His teammate, Jordan Dawson, has had a great season to average 101 and take the fifth best defender. He wasn’t particularly consistent but had some big number games, including the final round. Only 2% of coaches had him and they would have benefited greatly.

To make up the final six is Jayden Short. He averaged 98.3 but caused his coaches a wide range of emotions with his up and down scoring. His solid performance meant he nudged out the likes of Tom Stewart, Jordan Ridley, and Callum Mills, all of whom had good but injury (or COVID) impacted years.

It’s no surprise that Jack Macrae takes out the number one midfield spot, as he’s also the number ranked player across the board. He continues to put together strong seasons and is a lock in most starting lineups. His average of 128 and his durability to play 22 games will continue to keep him in the mix for a few years yet.

Jack Steele had another great season, ranked number two in the midfield and had his ownership gradually increase as the season went on. This season showed his ceiling and a solid VC/C option for coaches.

Clayton Oliver had another great season, albeit there were times as a Clarrie owner where I felt his form dipped when I needed him to perform. His average of 123 is nothing to smirk at though, and it’s no wonder he is owned by nearly 40% of teams.

The Bont, Marcus Bontempelli, is another midfielder who is often one of the first picked in any side. He shared plenty of points with his teammates and was a regular top scorer for the Bulldogs. For 2022 he’ll be priced very competitively and plenty will jump on early if this year’s form is anything to go by.

Each year we’re looking for that breakout player and for our midfielders this year that man was Touk Miller. There’s not much to write home about coming out of the Gold Coast Suns, but Miller’s form and solid scoring week in and week out proved that this year was a big one. In the end he averaged 124.5 and was the fifth best ranked midfielder. At the end of the season only 9% of us coaches ended up with him in our side so he continued to be a POD right up until the end. Another to look to start for 2022, albeit at a high price.

Another POD for the season came out of the Brisbane Lions. Jarryd Lyons ended up with 12% ownership and performed solidly throughout, showing off some terrific ceiling on his way to an average of 117.6.

Other honourable mentions in our midfields are the likes of Tom Mitchell, Sam Walsh, Zach Merrett, Darcy Parish, and Ollie Wines. All of these guys averaged over 112 and played 22 games. It will be a hard decision to work out who to include in our starting teams next season.

For the first time in a couple of years the final ruck rankings do not start with Max Gawn and Brodie Grundy.

Gawn did take out the number one ruck position, however it wasn’t as dominant as previous seasons. This was his lowest average (120) since injury impacted the 2017 season (97). Nevertheless, he was a set and forget option and continues to be for 2022, particularly with a lower starting price than this year.

Nic Naitanui managed to take the second top ruck spot with some great scores and a full season of games. He’s often left off the Supercoach analysis as a sure thing because of previous injury affected seasons, and there’s a sense of not being able to trust him. This season proved he could do the job and will be a good price come 2022 that will make many consider more than they did this year.

The breakout player for our ruck lines was easily Sean Darcy. Perhaps it’s because he plays for a team in the West that many coaches don’t consider him, but even as we close out the season he is only owned by 3% of teams. As a highlight, his 193 and 187 in rounds 16 and 17 were gems and turned heads throughout the SC community. One to ponder for 2022 for sure.

Brodie Grundy didn’t really have the season we expected of him, particularly after that neck injury. He still managed an average of 115 from 20 games, and quite some way in front of the likes of Todd Goldsteain (100.8) and Tom Hickey (103.3).

The forward lines were the most troubling of the lot for us, if I remember rightly. There weren’t many on offer, nor were there decent enough rookie options throughout the season, and there were plenty of injuries affecting forwards or DPP’s.

However, Dayne Zorko showed up to take the number one forward position (keeping in mind he’s a DPP). He has had a good ceiling for many years and a solid performer for many teams. His average of 109 was competitive, but also pushed higher with games of 140, 162, and 173. He can have an off day and when he does it can make a significant impact on our side. However, with Lachie Neale out for a good chunk of time during the season Zorko played alongside Lyons and shared the points with him often enough.

Do you remember the whole debate about whether to bring Jack Ziebell in or not, particularly after the start he had? By the end of round six he was averaging 127! His scoring wasn’t sustainable, but in the end he was able to keep the second best ranking for a forward through the league, which is impressive given he claimed a wooden spoon and played off half back most of the time.

Ziebell’s teammate Aaron Hall came in as the best third forward, averaging 105 from 20 games. Not being selected for round one, and his first 3-4 performances really put people off jumping on him quickly. However, since Round 7 he only dipped below 100 once and so made his position secure in plenty of teams and was a solid player for those 18% of coaches that had him.

Bailey Dale knocked together a solid season. His average was only 95 in the end but he was a decent enough replacement for Josh Dunkley when he went down with injury.

It’s not all that common to have a true key forward in the top player rankings by the end of the season but Tom Hawkins makes it to number five with an average of 93.9. With the start of the season that Taylor Walker had we may have expected him to still be up here, but that form certainly didn’t continue. However, Hawkins made it this year because plenty of other forwards didn’t average their usual or what was expected of them.

The breakout player in our forward lines was certainly Essendon’s Nick Hind. A couple of pre-seasons now, and a full season of games into him and look what happens. He only averaged 93.0 but made it into the sixth best forward for the season. In the end only 8% of coaches had him, and were rewarded for their risk-taking.

What Could Have Been – The Injuries and Selections

SuperCoach is always a game of what could’ve been. There are sliding door moments each and every week as we navigate trades, captain selections, and strategies around injuries and suspensions. What could have been makes for some of the best banter about Supercoach.

In 12 years of playing the game I can’t quite remember such a volatile season with injuries, selections (and those dreaded late-outs), and of course this COVID thing. Let me just list off those players who may have impacted you at some point, perhaps even as far back as the pre-season: Lachie Whitfield, Patrick Dangerfield, Matt Rowell, Josh Dunkley, Zac Butters, Bachar Houli, Darcy Moore, Lachie Neale, Jeremy Howe, Luke Ryan, Patrick Cripps, Jordan Ridley, Mitch Duncan, Josh Kelly, Rowan Marshall, Nat Fyfe, Toby Greene, Sam Docherty, Hugh Greenwood, Callum Mills, Dustin Martin, and Tom Stewart. That’s a fairly long list of significant players who were out for a period of time. It was carnage for a few coaches regularly throughout the season.

On the other side of the ledger there are always those precious rookies and mid-pricers who seem to do more than we think they’re capable of. Think of the Hawthorn duo, Changkuoth Jiath and Jarman Impey. They both made coaches some solid points in the first half of the season and plenty of coin to trade with as well. As mentioned previously, a Crisp, Dawson, Mills type helped considerably along the way. The Sydney rookie midfielders were very serviceable in those opening six rounds, Braedan Campbell, Chad Warner, and Errol Gulden.

James Jordon certainly provided some points and cash for those who timed it right, and North Melbourne’s Tom Powell did the same. And of course, one of the bigger targets for many coaches at the start was Matt Flynn, an R2 strategy for many in the end. He managed to grab the coin we needed but was omitted for a couple of weeks there which raised concerns come bye time. Those mid-pricers or competitive priced players who made good on their promising risk were the likes of Dyson Heppell, Darcy Parish, Nick Hind, Aaron Hall, and perhaps Jordan De Goey for his second half of season.

Needless to say, there were some breakouts, there were some flops, but whatever the case it was another season to learn from and take the opportunity to improve on for next season. It’s those could’ve and should’ve moments that may make us shudder, but at the end of the day we’ve got to keep it all in perspective and they provide any chance to learn for next year. And sometimes it’s just unlucky. With this in mind, rest easy from Supercoach and sit and enjoy the promising finals series. Well done again on making it through the season, and all the best in your pre-season preparations for 2021.