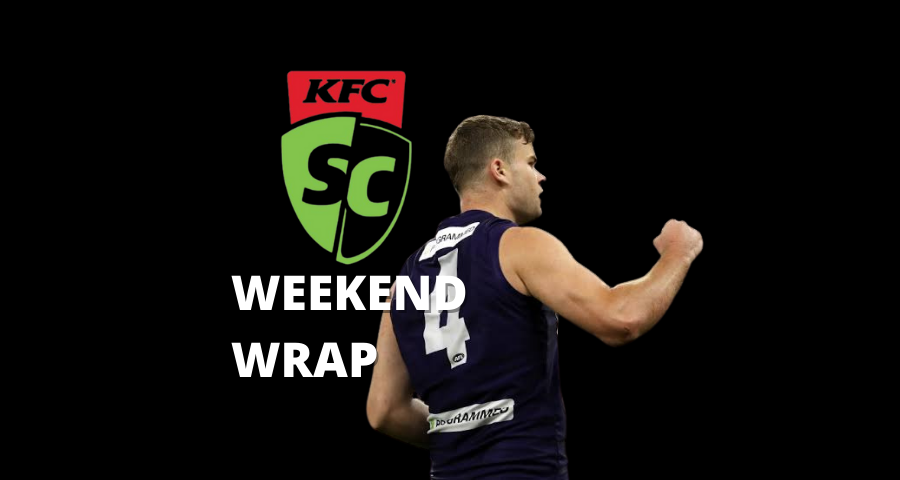 By now there are very few who are contending for the cash prize and so what drives your SuperCoach ambitions at this point in the season? Perhaps your team is settled, or almost there with 1-2 more trades to make? Perhaps you’re sitting pretty waiting for the league finals to begin so you can claim victory over your mates? Or perhaps there’s a slight chance you can make a league final series and so it’s all or nothing.

Now that the byes are well and truly gone this is the time of year where big things can happen. And when I say big things, I mean big scores. The premiums are in, the rookies are off the field, and the opportunity for some monster scores keep us coming back. Well, it is for me anyway.

And this week was case in point. The team of the week scored 2804! Sean Darcy topped the competition with a 193. Sean Darcy! Followed closely by Darcy Parish (190) and back-in-form-ripe-for-the-picking-forward Patrick Dangerfield had 184. This is what we come to see.

The big scores started on Thursday night as Touk Miller again led the Suns from the front with 153. An excellent VC choice in hindsight. Tom Lynch’s return was impressive with a 126, and now has to be in the conversation as a possible F6 option for some teams. He’s pretty cheap at $346k. Bachar Houli also had a 112 but has succumbed to the dreaded syndesmosis.

Now Friday night brought out the big guns in the wet. Parish and Dangerfield both went big and the eight other tons in the game don’t even seem worth mentioning. What was pleasing was to finally see Dangerfield show us his ceiling like we’d all been hoping for him to. Those 20% of coaches who now have him were richly rewarded. The rest live in regret.

GWS had a great win over Melbourne while Steven May top scored with 131. Josh Kelly had a great first half but then dropped off to lead the Giants side with a 118.

Despite getting completely done by the Lions, Rory Laird has a solid 129 and was the standout for the Crows in their loss. He is now ranked number two in defence for the season, and number 10 as a midfielder. He’s having a great SuperCoach season. For the Lion Marcus Adams led with a great 135, with Zac Bailey and Jarryd Lyons slightly behind in the mid-120s.

Carlton also had a great win over Fremantle, even though Sean Darcy took the rucking department by the horns and ended up with a huge 193. Who’d have thought he’d have been the fourth best ruck of the competition at the start of the season? Andrew Brayshaw and Luke Ryan also performed solidly for coaches who have them too. For the Blues, Sam Walsh was again impressive and will be on the wishlists of many teams come 2022. His 138 now moves him into seventh best midfielder for the season.

Charlie Dixon was the only plus-130 score in Port’s win over Hawthorn. If we’re talking big scores this week then there’s not much here to see. Lachlan Bramble, the rookie of the week, did manage an 80 though and earned $50k for those who jumped on him.

If we didn’t know the Eagles despised GMHBA Stadium then we certainly do after this week. Offt, what a performance. Sydney thumped them and in so doing Callum Mills scored 121 and Lance Franklin had a competitive 113. On the Eagles side of the ledger, there’s nothing much to say.

Jack Steele was on fire on Sunday afternoon as he led the Saints to beat the Pies. His 154 would’ve been a great captain selection for anyone who missed out on the scores in previous games. Brodie Grundy is the only one worth highlighting for the Pies as he led his team in scoring.

To round out the weekend the Bulldogs did the expected number over the Kangaroos. Jack Macrae found enough of the footy again to help deliver a 138, and gave plenty of coaches a decent enough captain score having missed out on other opportunities. Ziebell, Goldstein, Cunnington and Hall topped for the Roos and are all familiar to us no doubt.

Whatever your motivation going into the round I hope you enjoyed one or two big scores this week. It was certainly the round for it. All the best as we head toward the finish line, or finals at least. Chat to you next week.