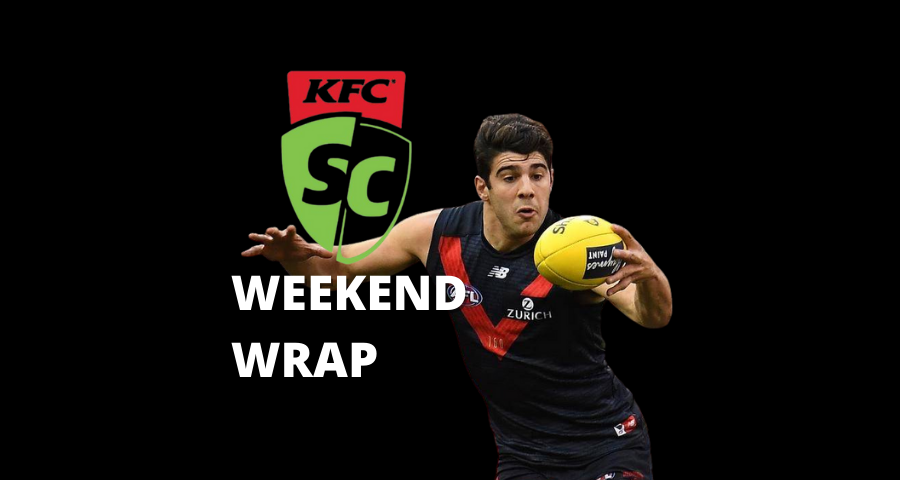 Moments. There are moments in life when things suddenly change. Perhaps it’s love at first sight while at the pub with a few mates. Perhaps it’s resigning from a job you just hate. Perhaps it’s when that first child arrives and you never imagined you could love more than you already do. Whatever it might be, there are moments. And for those of us invested in the world of SuperCoach there are moments too. Moments whereby an injury, a poor performance, or even a great performance can change the course of a round and even a season. Of course, let’s not equate these Supercoach moments to the realities of life and living, but in the life of season 2021, Round 17 may well be a moment for our teams and even for the teams we support.

It all started on Thursday night when Melbourne defeated Port Adelaide quite convincingly in the end. Christian Petracca had a monster with 173 points, followed by Tom McDonald (132), and Clayton Oliver (118). Their win solidified their top spot and if you had the VC on Petracca I suspect it would’ve done wonders for your overall rank or your leagues. For Port the usuals of Travis Boak and Ollie Wines topped the ton, while poor Zac Butters looks like he’ll be out after succumbing to injury again.

In what has been labelled the worst Friday night game in a long time the Bombers smashed the Crows who gave nothing for us as coaches or for their fans. Well, Rory Laird is the exception. Zac Merrett (143), Nick Hind (134), and Jordan Ridley (120), did what was needed for their teams. However, Kyle Langford did get subbed off with a suspected hammy so there will be 9308 coaches having to deal with that this week.

Fremantle did Hawthorn by 10 goals and with Sean Darcy (183) romping it in for the second week in a row. How he still has only 2.5% ownership is beyond me. Rory Lobb (132) got in on the action and David Mundy (121) was again amongst it. With Jai Newcombe out, Lachlan Bramble (120) was a terrific consolation prize for those still needing to play a rookie or two in the midfield. For those of us who had him on the pine I only hope you were able to get him onto the field. Tom Mitchell was the main man again for the Hawks with a 131.

Geelong did what was expected of them over Carlton, but Sam Walsh (158) is clearly the best player for the Blues and will be again highly sought after in 2022 by coaches who missed him this year. Tom Stewart (127), Zac Touhy (126), and Cam Guthrie (111) all helped themselves to tons for the Cats.

The debatable upset of the round this week was St Kilda defeating the Lions by a good 32 points. And I won’t dwell on poor old Eric Hipwood, but this match was a moment for Saints supporters as hopes are still alive for a possible finals run. Daniel Rich (128), Lachie Neale (118), and Dayne Zorko (109) all notched up tons. Any of these guys would be worth having in your team. But it was Jack Steele with a 149 that took the cookies on the night. His performance was stellar once again and he is rewarding his coaches big time. It’s hard to believe Tommy Highmore (97) is still performing nearly as well as many of our premium defenders, not to mention the POD of Rowan Marshall (95) for our forward lines.

Talking about moments. The Suns kicked two goals in the final four minutes to take the points against the Giants, and more likely changed the course of GWS’s season than their own. However it was the first half of football that may have impacted many of us. First, Hugh Greenwood went down with a an ACL meaning he got a donut for the round and will need to be traded. Second, Lachie Whitfield was done with a confirmed concussion and subbed out with only 32 on the board. Again, a likely trade out depending on structure and trades left. He may miss up to two games depending on the fixture over the next 12 days. A big blow for 16% of teams.

Another moment was the Swans beating the Dogs and in doing so are looking good for a run into finals. Jake Lloyd was back to his best (114) and Callum Mills (127) hasn’t stopped giving his coaches tons for a while now, but it was Jordan Dawson (141) and Tom McCartin (134) who were the big scorers for them this week. All the usual suspects from the Dogs performed well enough for our teams but couldn’t get the job done for their own. Jackson Macrae, for the first time in 30 games, had under 30 touches. It’s been a great run.

Collingwood was another who had a big turnaround with a seven goal run to clinch it by 16-points against Richmond. None other than Jordan De Goey helped himself to a handy 29 disposals and a 124. But in that run of goals it was Brodie Grundy who ended up blasting to 140 alongside teammate Taylor Adams. While the Pies had eight tons in the end the only Richmond ton came from none other than Jayden Short with another solid 129.

On Monday night the final match of the round saw West Coast continue to show they’ve fallen off the rails and North Melbourne were hard and skillful enough in the contest to take the points. Nic Naitinui scored a solid 134 despite their efforts, and Tim Kelly also a decent 115. For North, Jaidyn Stephenson had a terrific game with 38 touches and 153 points. His 6000 coaches would’ve been pleased. Ben Cunnington, Todd Goldstein, and Jy Simpkin all had solid tons too. This could be a defining moment for either of these teams.