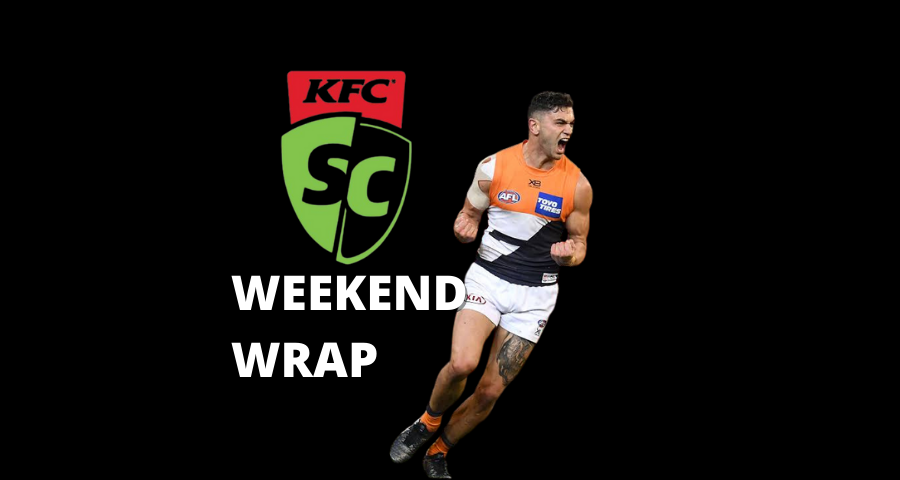 There was no way we were getting an easy run to close out the season was there? Something was always going to pop up as we headed toward the end of the home and away rounds. For Victoria it was being plunged back into a strict lockdown after a week of easing and good numbers, in Supercoach it began with Josh Kelly being a late out, a significant injury to Patrick Dangerfield, and then what looks like a suspension for Toby Greene. What a good way to start the weekend. Hmm.

I’m not sure if we call it an upset when a lower-placed team defeats Carlton but Gold Coast at least did. Touk Miller (155) again staring and showing he is something else amongst the rest of the 43 on-field. His teammate, Will Powell, also racked up a 153 and pleased over 2000 coaches. For the Blues, Nic Newman’s 126 was the only relevant high score in our Supercoach world, but has such low ownership (744 teams) that perhaps he’s not that relevant right now anyway.

In perhaps one of the hardest games to watch all weekend the Tigers, a shell of themselves right now, managed to overcome the Kangaroos. In the end there were a few hundreds in this one with Jack Graham (154), Nick Vlastuin (123), and Liam Baker (122) for the Tigers. On the other side of the fence, Luke Davies-Uniacke (119), Aaron Hall (116), and Todd Goldstein (115) were the main contributors.

In the Showdown Port Adelaide just got over the Crows, who competed well considering the week that’s been going on there. Paul Seedsman (120) and Rory Laird (119) managed some fine tons, while Allir Allir (126), Will Drew (126), and Dan Houston (116) led the Power numbers.

To add to the already painful round for many coaches Callum Mills was a late out for the Swans. St Kilda seemed to take full advantage of that, and just a poor performance, to take the win in what has to be one of the great rollercoaster seasons of recent time. Jack Steele (155) was again magnificent and a definite VC or C option for any coach. And as Rhyder continues to be out Rowan Marshall made the most of it with a 126. Jake Lloyd (112) and Luke Parker (108) top scored for the Swans but the midfield was really missing this week.

Clearly Alistair Clarkson is still the top coach in the league so having him finish up at Hawthorn at season’s end will do wonders for them. It all makes perfect sense, doesn’t it? Umm. He’s certainly coaching well right now as the Hawks did a number over the Pies with Tom Mitchell in full-beastmode (150). Jack Scrimshaw (127) and Blake Hardwick (125) also brought the points for respective coaches too. On the other hand, the Pies really battled to score points at all and so we’re left with an underwhelming 107 from Brodie Grundy to deal with.

In what might’ve been the game of the round the Dons knocked off the Bulldogs. Jackson Macrae (154), Marcus Bontempelli (123), and Tim English (123) led the Bulldogs numbers, and such a shame to see Josh Bruce do his ACL right towards the end of the game. But for the Dons it was two-metre-Peter Wright who put on a stunning forward performance with 7 goals and 146 SC points. Unsurprisingly, Zac Merret was in the mix with a 123 and Sam Draper a competitive 109. The fight for the eighth position is still on for the Dons!

Brisbane trounced Fremantle and in doing so solidified their finals berth. Dayne Zorko led from the front with a 146, pulling along Harris Andrews (123) and Daniel Rich (122). For the Dockers Sean Darcy continued to top their scoring with a 120 and then Caleb Serong (115) the only other ton.

To wrap up the round on Monday night the Dees did what was expected, although not without some competitive periods from the Eagles and a lightning storm that put a pause on the match for half an hour. While West Coast look to be giving away their finals spot to a team more competitive, Jack Redden (125), Elliott Yeo (117), and NicNat (107) did top tons for us. And for Melbourne it was Alex Neal-Bullen (138), James Harmes (123), and Christian Petracca (111) who topped scored and helped numerous coaches make it through to another stage of finals.

As for me, the Kelly and Mills outs really killed my chances. In my only cash league where I had the double chance I’ve been done in straight sets. Disappointing. However, with so few coaches still in the hunt in finals I hope you’re one of them and looking to make your move this week to capture that GF spot! Till next week.