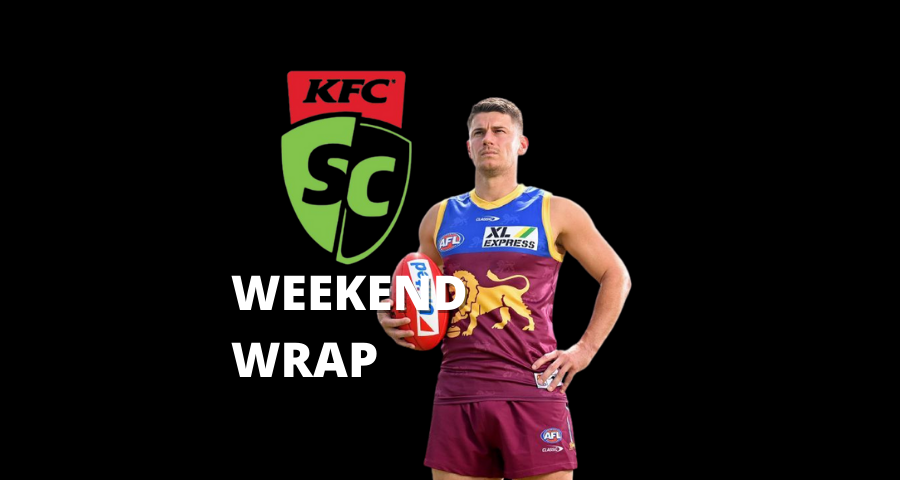 When it’s carnage before the round starts you know it’s going to be an interesting round for. In the lead up to Friday night we were notified of Toby Greene, Jake Lloyd, Shannon Hurn, Callum Mills, Reilly O’Brien, and Tom Stewart. What a mess, especially for our defences.

In Friday night’s do or die match-up the Giants delivered the knockout blow to the Tigers. GWS put up a great performance, including the choice of holding the match at Marvel. Jayden Short (126), Nick Vlaustin (118), and Liam Baker (115) were the top for the Tigers. But it was Josh Kelly’s 148 that provided the platform for the Giants. Tim Taranto, even playing forward at times, knocked up 138, and the young Jacob Hopper rounded it out with 114.

The penultimate match of Clarkson’s reign was a sweet and surprising victory over the Bulldogs. The usuals of Jackson Macrae (136), Tom Liberatore (132), and Marcus Bontempelli (114) all headed the Bulldogs scores. While for the Hawks Chad Wingard (130), Dylan Howe (129), and Tim O’Brien (125) scored were the Hawks top performers.

In Geelong’s win over the Saints they had half their team score over 90, there were certainly plenty of points on offer. Of significance was Patrick Dangerfield’s monster 169. If you had him as a VC/C option then congratulations to you. Sam Menegola (145) and Rhys Stanley (143) also had some huge numbers and pleased their coaches. Jack Steele, which is commonplace now, headed up the Saints with a straight 100.

Just another week and another disastrous game for the Blues and their coach David Teague while Port certainly solidified their top four aspirations. It didn’t help that Patrick Cripps was a late out, but that wouldn’t have changed the result much. But for us Supercoaches it would have allowed another on field. Matt Kennedy (130) and Sam Walsh (115) were the only tons for Carlton. And for Port Adelaide it was Aliir Aliir (137), Peter Ladhams (118), and Travis Boak (106).

Brisbane also did a number over Collingwood and in doing so gave coaches plenty of points. Jarryd Lyons had a big, and familiar, 152. Oscar McInerney had 131, and Dayne Zorko a solid 117. Jack Crisp (124), Jordan DeGoey (119), and Tayor Adams (116) were the tons for the Pies. There’s a few names here to consider for our teams come 2022.

The final match of Saturday was Sydney’s solid win over North Melbourne. Luke Parker (148), Will Hayward (135), and Harry Cunningham (111). Aaron Hall the only hundred for North, 127. There’s not much more to say really. Mills, Lloyd, and Lance Franklin all being out for the Swans mean our teams were most likely thin on the ground with Sydney players.

Come Sunday there were more outs, including Steven May for Melbourne. The Dees did the job over Adelaide, with Bailey Fritsch (132), Christian Petracca (126), and Ed Langdon (109) getting among the points. Ben Keays (125), Paul Seedsman (122), and Rory Sloane (122) for the Crows.

Gold Coast managed to scrap 30 points against Essendon, with Jake Stringer continuing his terrific form and bringing coaches a 147. Nick Hind (133) and Darcy Parish (112) made the top three pack with a long trail of tons following. Brayden Fiorini (119) and Touk Miller (103) were the only decent scores for the Suns. It defies logic why anyone has anyone other than Miller in their team. Perhaps a POD option for this week’s grand finals, if you have the trade!

In the battle for the West Fremantle made the most of a hapless West Coast, again. Sean Darcy continued his ripper season with a 150. Caleb Serong contributed a great goal and a 135 for those few coaches that have him, and David Mundy got to 134 by the end of it. NicNat (130) led from the front again, followed by Jack Redden (125) and Andrew Gaff (116).

For all of us this coming week, whether we’re playing for rank or for a league final, it’s a matter of trades available, outs, and those precious POD’s performing well. All the best to those in a granny this week, well done on getting through. And good luck to those fighting it out at the top of the rankings, or those looking to make one last big jump.