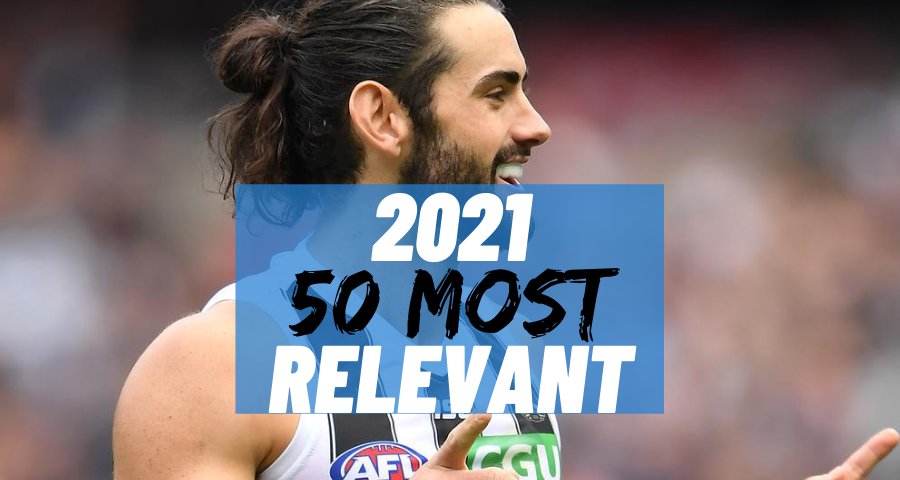 For years Brodie Grundy has been our first picked player. However, after a slow finish to the season, it has fantasy coaches wondering. Is he a value for money guy, or will others surpass him as a top 2 ruck?

2020 started just as the two previous seasons had ended for Brodie Grundy. A round one score of 179 in SuperCoach and 114 (142 adjusted) in AFLFantasy had owners delighted to start his year. Even with the shorter quarters he still led the league for hitouts (32 avg) and ranked 20th for total stoppage clearances.

Last year in AFLFantasy/DreamTeam he ended the year averaging 90.9 (adjusted average 113). His season consisted of 5 tons, 6 between 90-99, + an 82. Across the competition, he ranked 5th for total points and 10th for averages.

Over in SuperCoach he averaged 120 for the year and ranked 6th for toral points and averages overall. His season consisted of 15 tons, 8 over 120, a huge 5 over 140 and just one score under 85.

In AFLFantasy for 2019 it consisted of 17 tons, 11 of them were converted into 120+ scores while almost half of all tons (8) were 140 or above. In addition to scoring a ton in 77% of the time last year, he dipped beneath 90 in just three matches on his way to averaging 122 for the season. For the first time in his career, he was the top-scoring AFLFantasy player.

Grundy was even more dominant in SuperCoach! His seasonal average of 130 was built around 18 scores over one hundred and an insane 16 of these he turned into scores north of 120. Additionally, eight of his tons were over 140. Along with scoring a ton in 81% of games last year, he had only three games all year that he didn’t score above 90. For the first time in his career, he was the top-scoring SuperCoach player.

With that many scores over 120, let alone the 140+ scores Brodie Grundy is a good captaincy option every week. If you look at some of the most popular selections this year, you can easily see that Grundy towers above them in scores north of 120 from last year.

In the past 3 seasons, Brodie Grundy hasn’t missed a match, playing every single one of the 61 games available. To go with that durability is a freakish conversation of tons per games played. In SuperCoach he’s scored 52 tons since 2018, returning a 100 in 85% of games played. While for AFLFantasy, he’s scored 48 tons (including adjusted scoring) to be running at 78% conversion. If you want to look at pure 100+ scoring data in AFLFantasy/DreamTeam, then he’s delivering a ton at 67% of games.

What was the cause of this scoring slide? Some believe it’s due to him being managed over the last few rounds due to the condensed fixtures to have him ripe for finals. Others think it’s more mental exhaustion due to the hubs life. Some have even offered an undeclared injury as a potential explanation.

Maybe it’s one, some or neither of these. One thing is certain. He averaged 12.2 (15 adjusted) points per game less in AFLFantasy and 25 points per game less in SuperCoach when he played alongside Darcy Cameron. Can Collingwood play these two as well as Mason Cox on the same side? It might be hard to build a strong enough case to suggest he gets back to his 2018-2019 averages if they do.

2020 showed us some massive changes in the fantasy footy landscapes. What makes part of the season hard to analyse is when players seemingly for little justification have either poor moments or career high numbers. Was hub life and the shorter games the causation or this? Or was it purely correlation? How you view, that will inform how you view him as a starting squad candidate.

For some, they see a top tier scorer finally priced at a small discount. While for others, they saw enough late last year to warrant some desire to get some 2021 data before committing to him.

This season gives coaches of all mindsets something to ponder when it comes to our ruck division. It’s been years since we’ve had a RUC/FWD who’s capable of delivering premium scores most weeks. With Rowan Marshall coaches can either start him at R2 and maximise some value forward options. Or they can a value selection like Braydon Preuss who is a super popular R2 candidate.

A case can now be made that it isn’t a fait accompli that Brodie Grundy and Max Gawn will be the top two rucks for another year. Adelaide Crows best & fairest winner Reilly O’Brien put together a stunning season. His emergence in the past 18 months has fantasy coaches finally seeing a legitimate contender to the crown across the formats.

Brodie comes up against his favourite scoring side; the Western Bulldogs in round one. In his last three against them, he’s scored 179, 174, 160 in SuperCoach with a 3 game average of 171. For AFLFantasy/DreamTeam he’s scored 114, 168 & 154 averaging 145. And no, that’s not including an adjusted average score from his 2020 game. That’s the points he’s actually made.

However, it might not be all roses for Grundy this time round. Tim English has noticeably baulked up. While the Dogs have also recruited Stefan Martin, it might be the monster start we’d hoped for if they decide to double team him.

After that, the Pies play Carlton, GWS, West Coast, Essendon, Gold Coast and North Melbourne. The good news in this run is no Max Gawn. You’ll have to wait for round 13 for that clash.

If you’re convinced Grundy will return to his 120+ scoring days, then be bold and select him. If you’ve got reservations, the good news for you is you have options of either another premium, a quality stepping stone or to use DPP. Using either of these will provide you with a valid starting squad strategy if going against him.

12 months ago, Brodie Grundy was the consensus #1 pick across all drafting formats. While he’s still in consideration for some, it’s no longer as clear cut. Grundy is still a top 5 pick and won’t last for those with a mid-late first round selection.