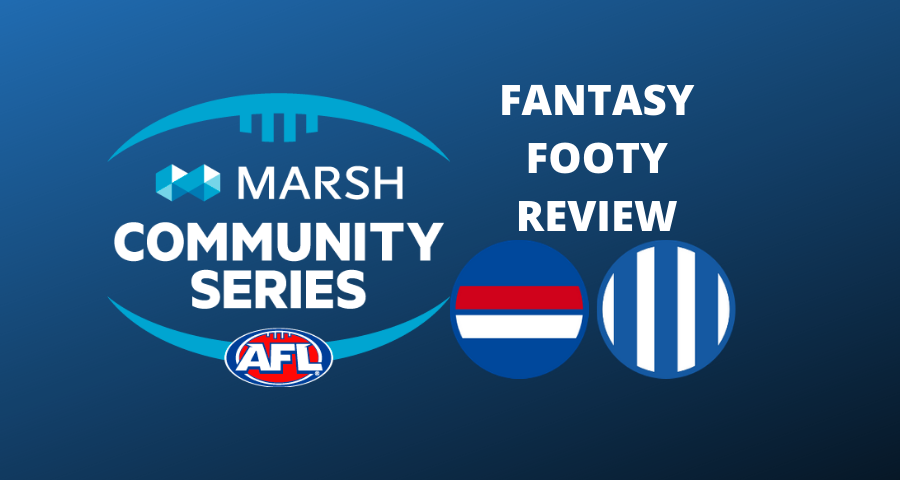 Under an open roof, the Kangaroos came to take on the Dogs at Marvel Stadium, the ground that is fast becoming a Fantasy Feast for the Doggies, especially Bontempelli, Macrae and Dunkley and they didn’t disappoint.

North was without Higgins, Ziebell, Brown, Polec, Hall, Tarrant and LDU but brought with them a physical game, especially early on. The Dogs were without English, Naughton, Suckling, Bruce and Wood and after a tough first quarter, the Dogs got on top and pretty much cruised out the remaining game to win by a 44 point margin.

From the first bounce to the final siren looked like a Lamborghini in a Holden factory, clean, precise, articulate, smooth and creative, he brought his best, 37 disposals at 78% efficiency, 17 contested, 10 clearances, 8 tackles, 24 CBA’s and 2 last quarter goals to notch up a massive 195 SC and 151 AF points.

The second amigo who along with the Bont and Dunkley started every quarter in the guts and he also amassed over 20 CBA’s. Carrying on from 2019 not much has changed.

The third amigo, 21 CBA’s and every chance he’ll be the 150 point guy in his next game, these 3 are serious fantasy beasts.

Started slow, more of a lockdown role early but got into the game and hit 20 disposals Hayden Crozier: 21 disposals, with 8 marks, will be one to watch more closely in the role, especially for drafts

The rookie defender who presented well and kicked 3 goals Jordon Sweet: Rookie ruck, filled in for English, pretty much took on the sole ruck duties against Goldy, a cheap R3.

Predominant in the first half then shared duties with Xerri, looks fit and ready for the 2020 season, 20 of his HO’s were in the first quarter, the opposition tonight was poor.

Solid game but needs to realise theirs more points in kicking than there is in handballing, 27 disposals for 97 SC points.

Rookie Ruck-Fwd played predominantly forward and took full advantage of the opportunity, just needs to find a spot Jack Mahony: Rookie Mid-Fwd didn’t really get into the game with just the 6 disposals, do rate this guy, let’s see his next game

Rookie Forward nice cameo including mark of the day in which he went back and slotted the goal.

Rookie Ruck-Fwd-Loop hole candidate, he did exactly what most coaches wanted him to do, not play