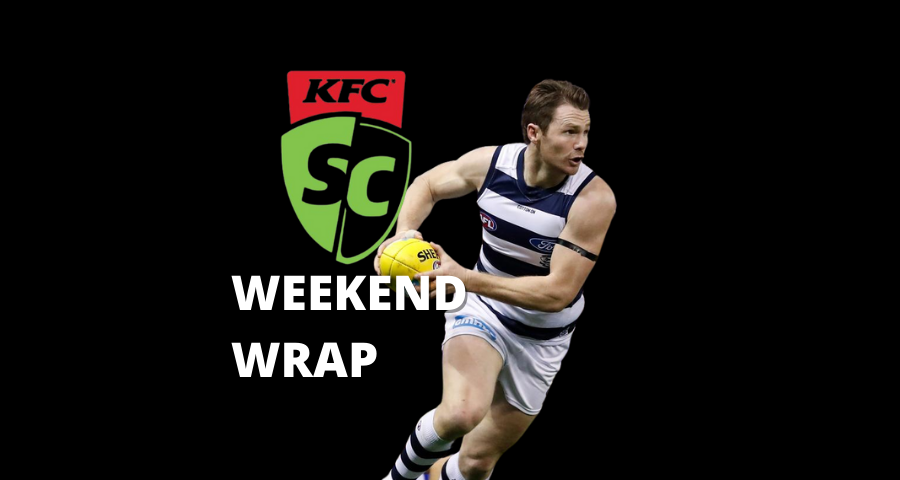 The hardest round of the year (for many).

The round we’ve all been planning for (well, some of us).

The round where plans were hip and shouldered when the fixture changed (thanks COVID).

The round where some Supercoach teams go to die.

I’m not sure how your team went but for most it was a challenge to even field 18. Although, with nine rounds to go there’s still plenty of points on offer and opportunities galore to move up those rankings and win those leagues.

On Friday I felt for all the coaches who had moved Mitch Duncan into their sides. I mean, I felt for Mitch as well, but he was a genuine POD option going into the round with less than 6% ownership. It’s a shame to see such an innocent act on the field result in an 8-12 week injury, add to that the drop of $70k in value. I hope you’ve got enough trades.

But Friday was also a test for those thinking of bringing in Patrick Dangerfield. He did enough to show us he still has the goods, and to think what his score may have been had he hit the target more accurately. With a 95 his price has now dropped to $515k and is expected to drop further still. Come the end of Round 15 he must be considered a forward trade-in, hopefully finalising your side for the season.

Other Geelong options worth considering are Joel Selwood and Tom Stewart. Stewart is in over 35% of teams and is well-regarded by many of us. Joel Selwood on the other-hand is only in 5% of teams and considering his form and the Cates run home might be worth an M8 position. As for the Bulldogs, as unlucky as they were, Bontempelli did the job for them and the rest followed along.

Port Adelaide trounched Gold Coast and there really isn’t anything good to say about the Suns. Even Liam Pickering struggled to find any form of superlative in his special comments on the game. It was a shame Robbie Gray had to be subbed out in his 250th, but Ollie Wines is still relevant (albeit on the expensive side) to anyone looking for another POD midfielder. Travis Boak is also one to consider, but wait a week or two and he’ll be under $500k.

Brisbane’s win over North was expected, but it was again interesting to see Jy Simpkin top score and now strung three hundreds together. A possible POD option at $524k perhaps? Jack Ziebell had his early season form return with a 134, and Aaron Hall lined up his seventh ton in a row.

But all eyes were on Lachie Neale, and didn’t he deliver! 156. This is the kind of scoring we know Neale for and he didn’t even reach his BE. For those on the lookout for a final midfielder then he pretty much sealed his own fate. Of course, it’s likely there will be plenty of people jumping on the Neale train in the next week or two but you can understand why with scores like this.

GWS’s win over Carlton was also expected. While Carlton came within striking distance during that final third quarter it was just a horrible performance. Lachie Whitfield (126) showed why he’s a powerhouse and threat to any team that doesn’t have him in their side. If you haven’t got him already then now is the time. Nick Haynes (96) again did well and is rewarding those who have jumped on him early post-bye. And Toby Greene (125) too was another value add prior to the round starting and rewarded those coaches who went with him. At the final whistle there were eight tons for GWS and nothing particularly helpful from the Blues.

In the final match of the round Bombers had a solid win over the Hawks. Huge congratulations to those 1% of coaches who had Jake Stringer and his 180, although he isn’t long-term relevant from here on in. And those other familiar names this year for the Dons all posted some good consistent scores; Nick Hind, Darcy Parish, Dyson Heppell, and Jordan Ridley. For the Hawks, Tom Mitchell had a solid 114 and perhaps those wanting to risk it all could be inclined to look favourably upon Jaeger O’Meara’s top score of 124. What is more relevant is perhaps Jarman Impey’s 109, who has now brought his BE down to a more acceptable level and doesn’t have to be traded out so quickly this week. And Jai Newcombe, while at the bottom of the list for points scored this week will most likely keep his spot and enable some cash generation in the next week or two.

Have a great week.