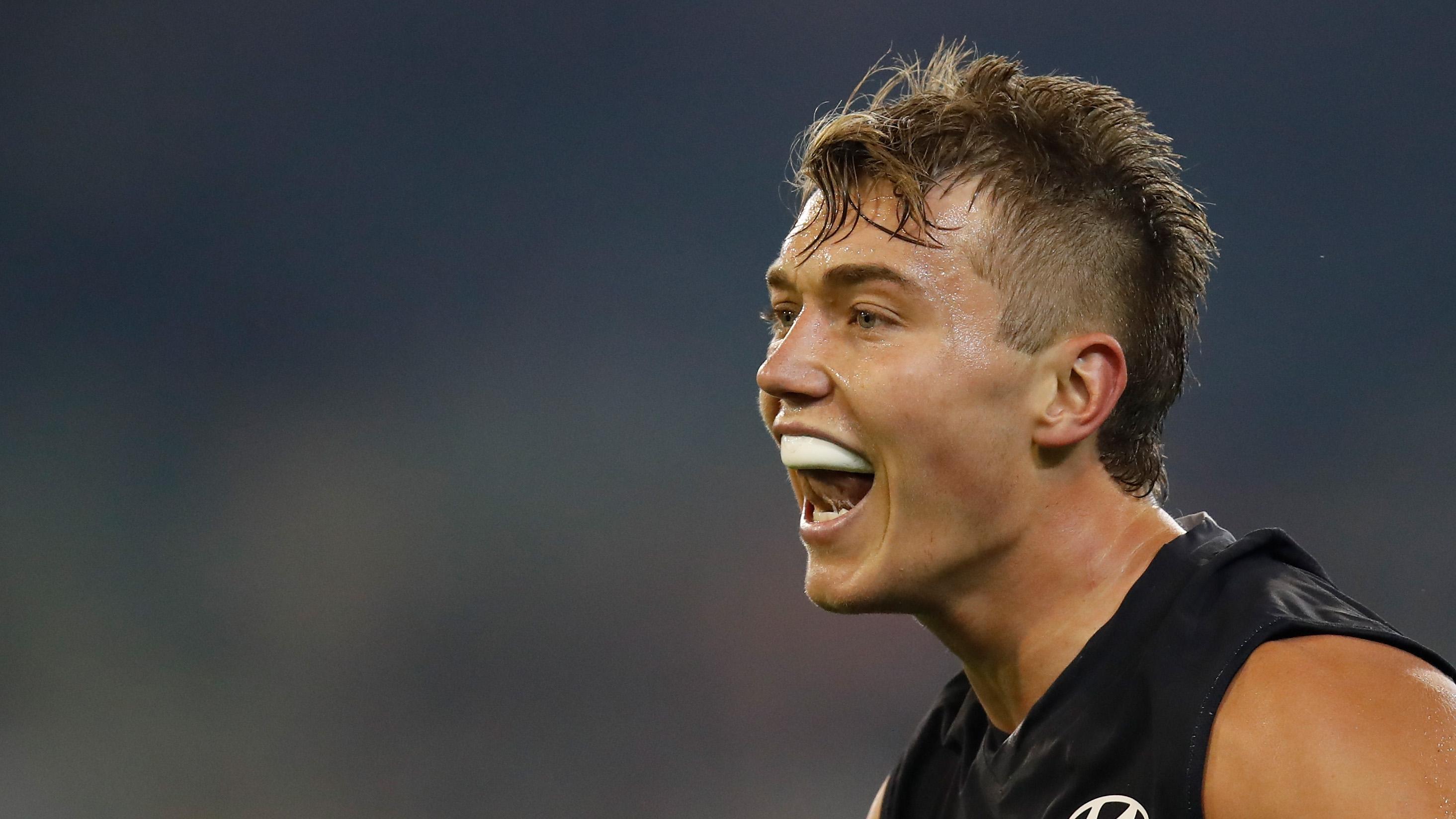 It was another strong season from Patrick Cripps.  He picked up his third club best and fairest, was the AFL PA Award winner and was given All Australian honours for the second year running.

Last season he was among the best midfielders in the game, he ranked second in the league for contested possessions and clearances while he led the AFL in centre clearances per game.

As strong as his season was ‘Crippa’ had a small fantasy footy points decline. In SuperCoach last season he had 13 games where he scored 100 or more, nine of these he went over 120 and finished the season with an average of 117. This season he also managed his career-high SuperCoach score against Brisbane with a 194 against the Brisbane Lions.

In starting squads last year Cripps was a popular selection, and those who did so had the full benefit of this selection. Between round 1-8 he posted six AFLFantasy tons, didn’t dip hos scores below 93 and was averaging 114.9. For SuperCoach it was seven tons, a low of 93 and an average of 126.

2019 Patrick Cripps was pretty good, but in terms of fantasy scores, it was a dip on his 2018 season. The 2018 season for AFLFantasy/DreamTeam he scored 14 tons, five of which were above 130 including 162 against the Suns. On the run home, he was absolutely on fire with 10 of his last 11 games were tons, with the one game being a 96.

Over in SuperCoach, he posted sixteen scored over the hundred marker and an insane four over 150 and a ridiculous two over 170. To top off this phenomenal season he had just the one score all season below 90.

He started like a house on fire, but if you upgraded to him post-round eight, chances are you would’ve found the scoring rollercoaster a frustrating ride. After six (AFLFantasy) and seven (SuperCoach) hundreds in his opening eight matches he was able only to post four (AFLFantasy) and five (SuperCoach) tons over the final ten games.

Additionally, to a lower frequency of tons, we saw a frequently lower-scoring floor. Five of the final ten games in AFLFantasy saw him score below 80 while it SuperCoachwhile it was just three.

During 2019 the Carlton Football club again sacked a coach midseason. While we did see an immediate spike in scoring 194 (SC) 154 (AF/DT), the change from Bolton to Teague in a topline sense didn’t change. He seasonal splits from round 1-11 and round 12-23 are identical with a SuperCoach average of 117 and AFLFantasy/DreamTeam of 101.

What happened with Cripps to end the season? Did opposition coaches figure him out with a tag? Did a load of carrying the team on his back cause a scoring deviation? Or has the Blues new game plan under Teague required Cripps get additional support? While the scoring splits don’t reveal any change, I do believe it’s a combination of all those elements.

Over multiple seasons Patrick Cripps has been one of the most popular picked premium midfielders. Already 2020 is shaping no different. Currently, he finds himself in 52% of sides. For some, those numbers make him an attractive player to ‘take on’ and look for a unique option. Players that have already appeared in the 50 Most relevant like Clayton Oliver (13%), Josh Dunkley (17%), Marcus Bontempelli (10%) Andrew Gaff (2%) and Dayne Zorko (2%) might all be good options.

However, for others that ownership locks him deeper into their teams as they do not want to miss out on one of the few midfield premiums that’s capable of taking a season away from you in 6 weeks. If you don’t have him in your starting squad, he’s certainly someone to consider as an upgrade even with high ownership numbers. Just be aware that trading in a ‘popular’ guy won’t assist you in making any ground on the pack if you’re behind them.

For AFLFantasy/DreamTeam coaches he does present some value given he’s priced at 101, but 12 months earlier he was coming off the back of 1 personal best season of 109. Depending on which score you feel his 2020 is reflective of should provide you with the information you need to decide whether to start him or not.

SuperCoach drafts he’s a genuine M1selection and if he isn’t drafted in the opening round it won’t be long into the second round that he lasts. For AFLFantasy/DreamTeam formats he’s ranked just outside the top 20 midfielders based on 2019 averages. The earliest he should go in a draft is the third round, however, if you desperately want him you will likely need to reach into the second round.