SuperCoach Weekend Wrap Up | Round 8 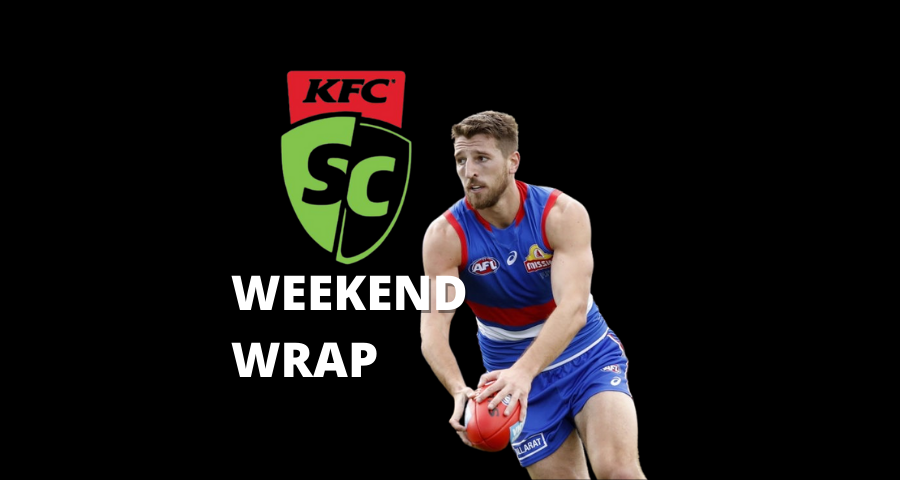 If it feels to you like this past weekend was ‘meh’ then you’re right. It was. There wasn’t much to write home about. I mean, there were a few high scores here and there but nothing out-of-the-box.

Friday night started with a great performance by Geelong to well and truly knock off the reigning premiers. Shai Bolton has to have all but locked up the mark of the year, and a good showing score wise makes him an option to consider as permanent for our forward lines. Although now that I wake on Tuesday morning I read that he’s broken his hand after a nightclub incident. Ignore the previous sentence. Jayden Short continues to tempt us with a 98 and now a BE of 69. Tom Hawkins and Jeremy Cameron scored really well for the 3% of coaches that have them. And Mitch Duncan and Cam Guthrie continue their excellent season.

St Kilda came from behind to defeat Gold Coast. Jack Billings put up good numbers and Jack Steele did as was expected of him. Touk Miller is also putting together a consistent season and is now ranked the 10th best midfielder in the competition.

The Giants pipped the Dons with Tim Taranto and Josh Kelly leading their teams’ scores. Another good week for all those Kelly owners, and is a steal at 511k for all those who don’t have him. Typical of Essendon was Zac Merrett and Darcy Parish’s run of form, doing what we now expect.

Collingwood met expectations as they knocked off North Melbourne. Ziebell clocked up another ton and is now the number one ranked forward. Aaron Hall looks like an interesting prospect for our forward lines too. He’s been scoring well recently and at only $419k might come into consideration for some. Darcy Moore top scored for Collingwood, playing back where he needs to be. Think of all the points we could have right now had Bucks been playing him in position! And I can’t go past this match without mentioning Jordan De Goey. Last week I threw up the question of whether he was someone to consider for our forward line. By this week’s result it seems he might be. I mean, he did have to kick 6 goals to score 118. Nevertheless, he’s now $296K with a BE of 6. Decisions, decisions.

Saturday night saw Melbourne defeat Sydney in a great contest. Clayton Oliver, Christian Salem, Gawn, and Harmes all scored well. Callum Mills had another great week in what is becoming a great season for him. His move to the midfield has done wonders for his scoring and he’s now ranked the number one defender. Parker, Lloyd, and Hickey all made solid contributions to our teams as well.

Port crushed Adelaide in the showdown but there’s about as much to mention here as what should’ve been mentioned about those prison bar guernseys. Yawn. It is worth highlighting Rowe’s score of 81 though, which now looks like he’ll be making more cash for those who kept him. And it was a shame Frederick ended up being the sub, causing plenty of panic from coaches.

The Eagles over the Hawks provided Tom Mitchell with another opportunity to ask 86% of coaches why he’s not in our teams yet. The run may have begun, and his fixture looks delicious. Impey and Jiath continued in good form, I hope your team still has one of them at least. And for the Eagles Andrew Gaff returned good numbers.

While the Bulldogs defeated the Blues it is worth pondering Jacob Weitering as another decent defender option among many. He’s been consistent for a good five weeks now. The Bont took the cake for the Doggies this week. It seems it gets shared around each week and it happened to be his turn this time. Libba and Macrae scored well too, but there were plenty of owners ruing the decision to make him captain. Oh what the scores could’ve been! And Caleb Daniel worried owners for the first half, with 17 points up to the main break, but then exploded to reach the ton.

And finally, Brisbane nudged out Fremantle. Another ‘meh’ game but considerable scores from Jarryd Lyons, Hugh McCluggage (again!), and Daniel Rich. Daniher continues to make money for his owners and score enough points to keep him on the field.

Last week may have been the time to use our trades to bring in some rookie talent and a premo. This week might be the time for a double-downgrade, if we can afford it, for cash generation. Remember, the byes are heading our way with speed, so if you haven’t thought about that already then it’s planning week as well. Whatever way you go, I hope you have a great week.