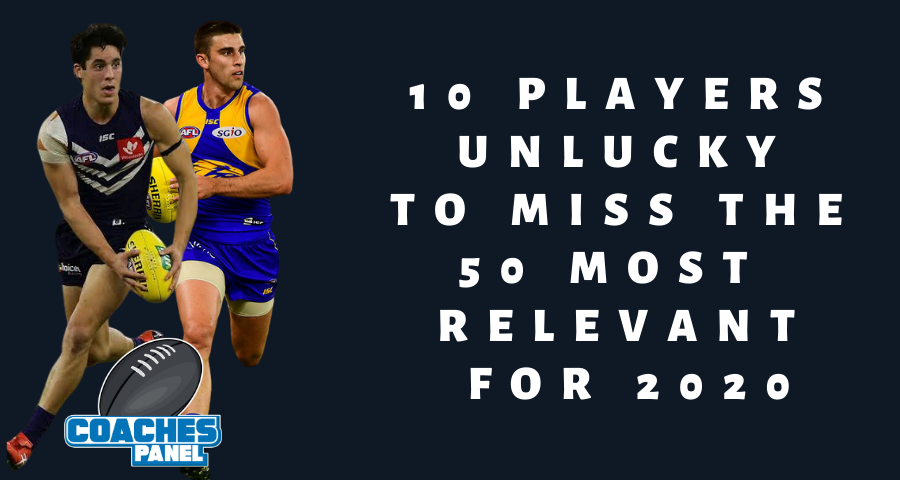 One of the hardest things in doing my annual 50 Most Relevant is culling players from the countdown that could be relevant in fantasy footy in 2020. Here are 10 Players Unlucky to Miss the 50 Most Relevant for 2020

Potential can be a dangerous word in fantasy footy circles. Andrew Brayshaw has plenty of points-scoring potential, and a case can quickly be built that he takes on plenty of responsibility in the midfield.

While he is every chance of pushing his season average north another 15 points per game into the mid 80’s he’s had only six scores in AFLFantasy and seven in SuperCoach over 80 in his 39 game career.

The positive trend is that four of those scores game over the final seven games of last season, but with only a few scores north of 90 in his career he’s filled with potential, but as yet he’s relatively unproven.

Jordan Dawson came of age as a fantasy footballer last year. And now entering in 2020 he has arguably the most beneficial DPP pairing as a Defender/Forward.

My concern around Dawson is that last year his role changed multiple times across the season. Firstly as a wingman, then a half-forward and to finish the season across half-back. It was apparent that John Longmire liked him as the ‘Mr FixIt.’

In the right role, ‘JD’ has shown his scoring capacity, with eight scores above 90 in AFLFantasy and 10 in SuperCoach. However, I have a genuine concern that should one injury occur to the ideal Swans best 22 he’s the first guy moved to plug the hole meaning his fantasy scoring deviation week to week is a considerable risk.

When I was initially crafting the top 50, Bennell was firmly in mind. However, there was one problem. At the time, he didn’t have an AFL contract.

Less than a month ago (around about halfway through the countdown) the Melbourne Football Club offered Harley a contract as a rookie.

Last year I started the 50 Most Relevant with Harley, and if you want to see my take on his scoring history and potential, then you should check it out.

It’s pretty simple though, at his price and when if gets named, he’ll be hard to pass on even with the injury history.

It’s a similar line of argument for why ‘Chez’ missed as there was for Andrew Brayshaw. The role is there for the taking and as a junior, he showed he’s got the skills to be a phenomenal midfield talent. The question is very much around how do they structure up under a new coach?
Additionally, will he generate enough funds and score enough points to be the stepping stone you need?

Last season Brad Ebert was flying in his new role as a half-forward. Between rounds 1-6 he had just the one score below 90 and was averaging 100 in all formats. From there he suffered a severe concussion and struggled across the remainder of the season.

In recent days the Port Adelaide coaching staff have declared he’ll be moving back into the midfield where he consistently averaged around the 90 marks. If that information had been publicly available a few months earlier he probably would’ve found himself into the 50 given the low number of potential forwards capable of scoring in that range.

2019 was the year that Brad, his club and fantasy footy fans were anticipating. He played every game and ended the year with an average of 98 in SuperCoach and had the ninth highest average overall in AFLFantasy with 107.8.

At his price point, he no longer presents the value of 2019, and to be a viable option you need him to look to elevate his game a further 10-15 points per game in SuperCoach and an additional 5 in AFLFantasy. Could he? Yes! But at his price and given his career injury history, there is little merit in starting with him.

Seb, I don’t know what you did to ‘Richo’, but he had it in for you last year. After being a constant inside midfield presence and averaging over 100 in 2017-2018 in all formats suffered a decent scoring dip. Last year he dropped 5 points per game in SuperCoach and 13 in AFLFantasy.

This preseason his teammate Dan Houston is the ‘hype man’ that every man and dog is on. I do understand the attraction, but DBJ is just as competent as a scoring companion.

What’s even more compelling about those averages over 14 game is that it includes a game where he played deep defence and scored single figures.

It’s a fairly simplistic answer, but an honest one. There are only so many premium midfielders you can include in a countdown like the 50 Most Relevant. Otherwise, the list turns into a ‘premo midfielders’ ranking.

Over the past two seasons, Yeo has proven his a consistent ‘105’ range midfielder and should you get the timing of him right he could be a perfect unique in your midfield.

There is one thing I’m convinced of though. Of all the midfielders that ‘could’ be impacted by the arrival of Tim Kelly, I’m least concerned about Yeo.

Now at his third AFL club, this premiership Tiger is hoping for another chance at the elite level. At the VFL level the past few seasons he’s been a reliable inside midfielder averaging 18 disposals, six tackles, four marks and four inside ’50s per game

At Essendon, the need for a big-bodied midfielder has been evident for years, and ‘Towner’ should be given a chance through this role.

As much ‘potential’ as he holds he’s also competing for this spot against Tom Cutler and Mitch Hibberd. Should he win out this battle and play forward, he will be a strong stepping stone candidate.